Hansaben can now bring her dreams to fruition | Milaap

Hansaben can now bring her dreams to fruition

Dressed in a pink traditional sari, Hansaben, a woman in her late thirties welcomed us inside her home with a serene expression on her face. It was a sunny afternoon with a clear blue sky which had a golden tint. Accompanied by one of the unit branch officers, I was here in Chandkheda to check on the progress of Puja Mahila Mandal, a group being led by Rajulaben Bhavsar, after they had taken a loan from Prayas, Milaap’s field partner. But as she was too occupied with work that day, I got a chance to meet another group member, Hansaben. With so many field visits in Chandkheda, I had now gotten acquainted with this district of Ahmedabad. But what I haven’t got accustomed to is the various rural women entrepreneurs that I meet and their stories, as their tales never cease to surprise me.

Hansaben has been running the business of tailoring for 25 years now. Her commitment and determination to work stands as an inspiration.

“I did a three-year course in tailoring and I passed the final exam with first class,” the corners of her mouth quirked upwards as she said this.

With her loan of Rs. 15,000 from Milaap, she brought a secondhand industrial sewing machine, one that is capable of performing many different processes at a time and is far more efficient than a regular sewing machine. Not only is she able to work faster, but the productivity has also increased significantly. Depending upon whether it is an off season or not, Hansaben earns a sum of Rs. 5000-8000 on a monthly basis. Her husband, who works in the garment industry, was all praises for her. His staunch support for her work was very apparent.

Together, they intend to expand this business of hers by taking another loan. Both of them dream to see their 17-year-old son Harsh as an engineer. I was all smiles seeing how rural amd semi-urban India is changing at such a rapid pace. With the support from the Milaap community of lenders, Hansaben and her husband are now bringing their dreams to fruition. 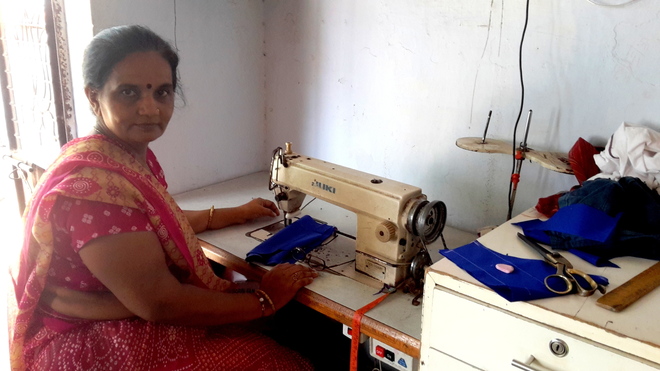 Hansaben and her new sewing machine