Even fresh flowers can't cover up this smell | Milaap

Even fresh flowers can't cover up this smell

Shares
Shares
Share on whatsapp
I went to visit Pappathi outside of Trichy in her village of Jeyankondam in March 2014. Along with four other women, she had gotten a loan roughly ten months prior to build a toilet. When I arrived at Pappathi’s house she was sitting where she sits every day, on the stone floor of her front porch. She was tying tiny white flowers together with black string to make the decorative arrangement that I had seen so many Indian women wear in their hair. With two boys in the 4th and 7th standards, I was curious about when she would gather and sell the flowers. She told me that after her children leave school at 9 a.m., she takes a bus to the nearby town of Musiri, where she buys hundreds of individual flowers. She buses back to her house and spends the day tying the flowers, then sells them from 4-7pm while her in-laws watch her kids.
Jeyankondam is home to roughly 75 families, and most of the men, like her husband, are agricultural laborers. The majority of the families also don’t have toilets. When I asked Pappathi if she had built a toilet or not, she looked uncomfortable. She said that her family had used the money to cover another loan from a local moneylender, although it was not clear how much of the Rs. 10,000 Milaap loan went to pay off the pre-existing loan. Local moneylenders in her village charge between two to five percent monthly interest. Pappathi said that she had plans to build a toilet within six months when her family can save up the money to afford one. She said that there are masons in the village that know how to build toilets, and the cheapest model costs roughly Rs. 15,000. Hopefully Pappathi and her family will prioritize sanitation, and save up the money to build a toilet in the future. 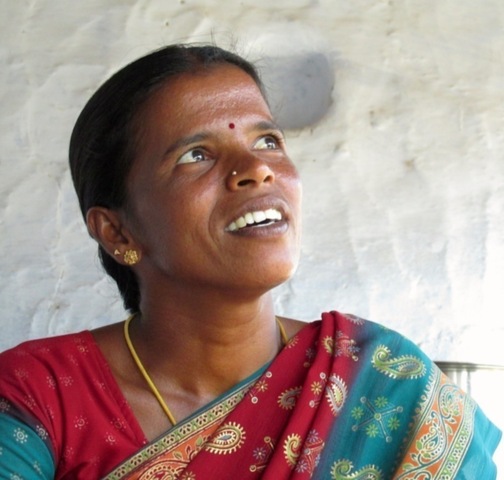