43-year-old Miraben was sitting in her permanent spot in the marketplace, selling spices, tending her injured leg and back, when an entire wall collapsed on her during the earthquake 13 years back. This brave-hearted woman is one among the many earthquake-affected people in Kutch district. The earthquake of 2001 was one of the worst disasters in India in the last 180 years; one where thousands of people died and vast areas of the district were laid waste. As Miraben shared her tale of survival with me, I realized with a pang of shock about how horrendous it must have been for her. I was here in the district of Kutch to check on the progress of Aashapura Mahila Mandal, being led by Rekhaben after they had borrowed an enterprise loan. As Rekhaben was too busy that day, I got the opportunity to meet Miraben, one courageous woman.

Every day, Miraben comes to the market at 8 a.m. sharp, and leaves at 8 p.m. She has devoted 25 years of her life to this business of selling spices. She clearly stated that this is her life now, and without this, she could have never been able to sustain her family. Her husband, who is a fruit vendor, has his stall set up exactly in front of hers.

With her loan of Rs. 15,000 from Milaap, Miraben bought a lot of stock in bulk. She is able to earn a sum of Rs. 200 -300 on a daily basis. Considering the inflation, she says that meeting the household expenses is an onerous task. But the loan has helped her to a huge extent. She is able to save Rs. 1000 every month.

Miraben dreams to have a shop of her own. She has worked almost all her life, and not even now does she wish to stop. She has already started repaying her loan. Such strong-willed women like her stand as inspiring figures. With the support from Milaap’s community of lenders, not only was she able to sustain her family, but this also increased her confidence to a great extent. 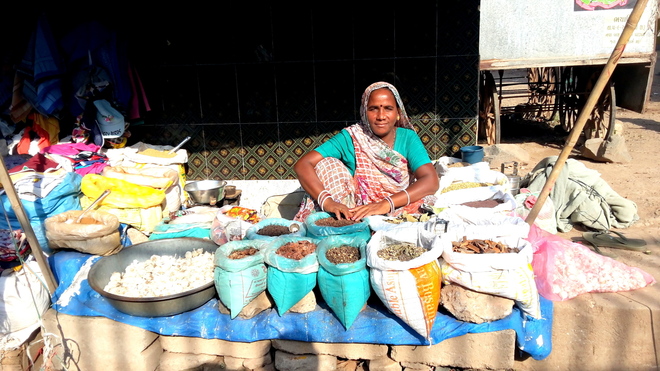 Miraben and her stock of spices