Electrician Father Seeks Help To Save His Litte Daughter From Cancer

Shares
Shares
Share on whatsapp
Each year in India, over 9,500 people are diagnosed with a dangerous form of cancer which goes undetected until the last stage, called bone cancer.
Deepika is a 4-year-old girl who had a close encounter with death because her bone cancer was undetected. With the help of few doctors who correctly detected the condition, she was saved. But her parents now lack the funds to support her treatment and she is in danger of getting the tumour back.
Putturaju, an electrician, his wife-Shobha, and two children live in a small rented house in Bangalore. 4-year-old Deepika is their younger daughter. She is undergoing chemotherapy to prevent a recurrence of her shoulder cancer. 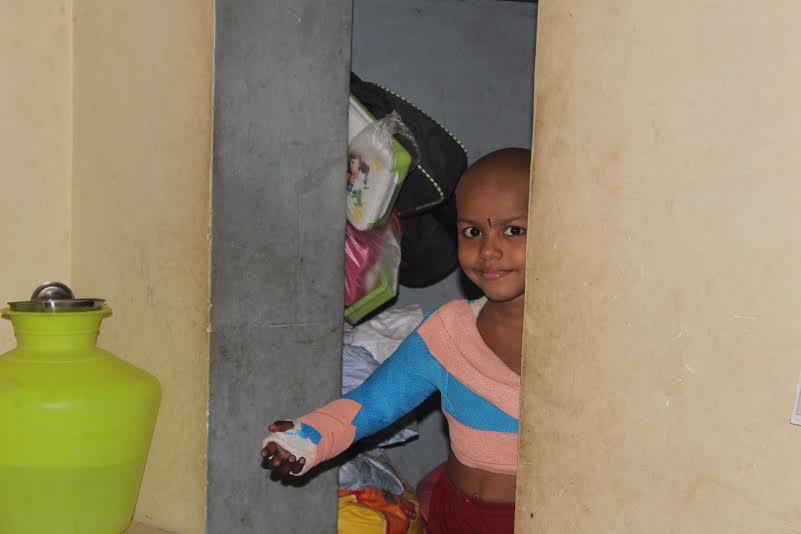 It all started early last year when Deepika fell accidently while playing  near her house. She cried out loud, not able to tolerate pain and her parents thought it was a broken bone that is causing her this immense pain. She was rushed to a local hospital.
“She just fell, there should be nothing dangerous”, Shobha kept saying to the nurse who was examining Deepika’s shoulder. Deep down she knew something was wrong. Deepika was crying out loud in pain and the doctors didn’t think it was a broken bone.
Doctors at the local hospital decided to operate her to understand what was causing the pain. But during the operation, Deepika started bleeding profusely from her shoulder. The doctors realised that the decision to operate without knowing the nature of the condition was a mistake. They stitched it up. The operation made it worse for Deepika. She was in so much pain that she stopped eating and sleeping. 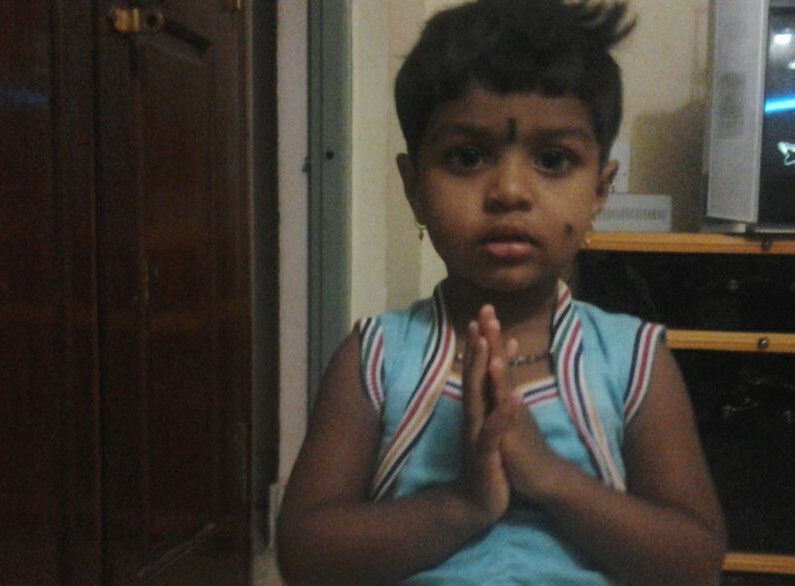 Her parents immediately took her to another hospital in the hope that she will be saved. The doctors at the new hospital referred them to Dr Pramod Chinder, who was a musculoskeletal oncologist. When Dr Pramod knew about Deepika’s symptoms and pain, he understood it was a case of bone cancer. But to his surprise, the biopsy reports came as negative. Persistent to help Deepika, he did the biopsy again and this time, he was correct; Deepika had a malignant tumour on her shoulder.
“It was high-grade cancer and would have cost her life if she wasn’t brought to us on time”, says doctor Pramod.

Dejected, Deepika’s parents Took her Home Without informing The Doctors

Once the reports showed that Deepika had bone cancer, the doctors quickly decided to remove the tumour through surgery. Putturaju and Shobha were given the estimation letter to arrange for funds.
Putturaju received the estimation letter from the doctor. He looked at the freshly printed paper in his hands and in silence turned to his wife. Shobha couldn’t read what her husband’s eyes were telling her. They stood in silence till the commotion outside disturbed their silent thoughts. Shobha gestured with her eyes to check if everything was okay. Her heart skipped a beat when she saw a tear drop hit the paper; her husband was crying.  She couldn’t tolerate this silence. She pulled the document and looked at it. All that the illiterate wife could understand was some numbers printed on the document. Her eyes fixed itself to the 6 digit number. Her teary eyes met her husband’s.There was no way they could manage the cost of the surgery. They didn’t have a house to sell. Their relatives were as poor as them. 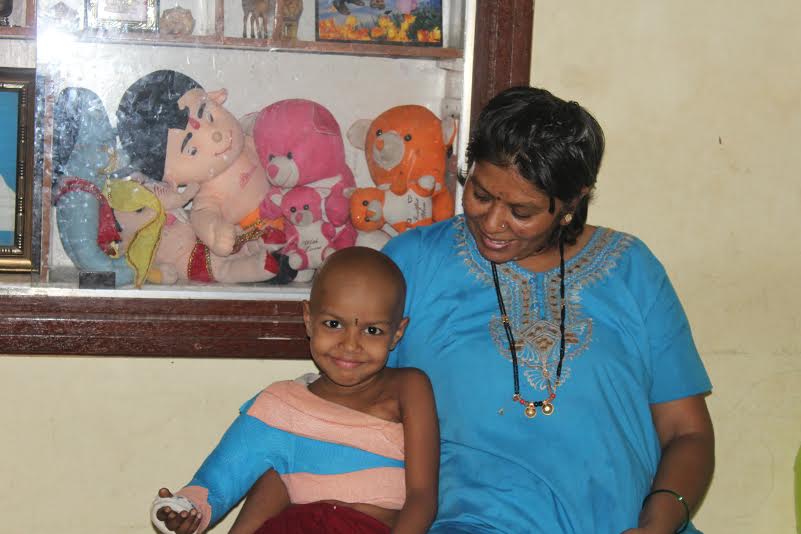 They couldn’t control their tears. Between the four walls of the hospital room, they cried their hearts out holding Deepika close. They knew that they can’t save their daughter.
They didn't know how long they were standing like there, maybe hours. Putturaju slowly picked Deepika and asked Shobha to pack their small bag. They walked out of the hospital, leaving behind their hopes of seeing their daughter alive and healthy.

13 Hours Of Waiting To Save A Life

Dr Pramod observed that Deepika has not visited the hospital since he informed her parents about the surgery. Soon he realised they disappeared without telling the hospital. He quickly looked up the records and found Putturaju’s number.
After 8 days: Deepika's eyes were flickering, watching the light right above her in the operation theatre. She looked at Dr Pramod’s smiling eyes and slowly her eyes closed and took her into a deep slumber. It was long and complicated surgery. 75%-80% of her shoulder bone was affected by the tumour. There was no way but to remove the complete tumour which meant that she will lose portion of her shoulder-elbow bone.
“We had to replace the shoulder bone with another bone. All of us have a spare bone called ‘Fibula' in our body; we decided to go ahead with a micro-surgery to replace the affected bone”, says Dr Pramod.
Putturaju and Shobha waited impatiently outside the operation theatre. Deepika was taken in at 7.30 am. They didn’t know why it took so long. Shobha expectantly looked at the nurses walking out of the room. But they didn’t reveal anything. 8 hours passed and there was no news. The wait seemed eternal. They started to fear the worst. The only prayer that was running through Shobha’s mind was to see her daughter come out alive through the doors.

Deepika’s Doctors Came Together to Help the Family

After 13 long hours of surgery, Deepika’s tumour was removed. Her mother’s prayers were answered and she did make it alive after the surgery. Happy tears flowing out of her eyes, Shobha thanked the doctors who saved her daughter.
Deepika’s doctors did something extraordinary. The day when Dr Pramod found that Putturaju had disappeared from the hospital, he went on finding his number and spoke to him. It didn’t take much time for him to understand that the reason for their disappearance was due to lack of funds. Then he did something that most doctors wouldn’t do. Dr Pramod and other doctors who were involved in Deepika’s treatment waived their fees.
“Only the consumables like medications were charged. I collected some funds from my family and friends so that Deepika can undergo the surgery”, says Dr Pramod. This kind act by the doctors motivated Putturaju to take Deepika back to the hospital.

Deepika Is in Danger of Getting Her Cancer Back

Deepika is undergoing chemotherapy to avoid the tumour from coming back and it is crucial that she continues the treatment. While the doctors and the parents are trying their best to collect funds, the expenses are shooting up since Deepika has to visit the hospital every week. She is also very vulnerable to infections and is not allowed outside her home. Her 13-year-old brother is her only companion. She spots a smile despite her shoulder and hand being covered in bandages. 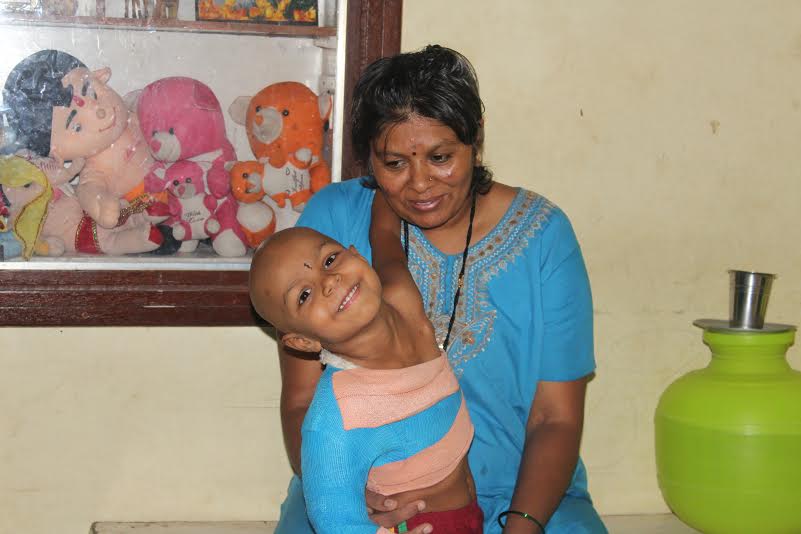 How Can You Help Deepika

Deepika was saved from the hands of death by the goodwill of the doctors but now she needs our support to make it alive and completely cured. Your support and contribution will help this family at this crucial time.
Funds collected will be transferred to HCG hospital where Deepika is undergoing treatment. Supporters will receive regular updates from Dr Pramod on Deepika’s progress.
We can help Deepika become free from cancer and pain. 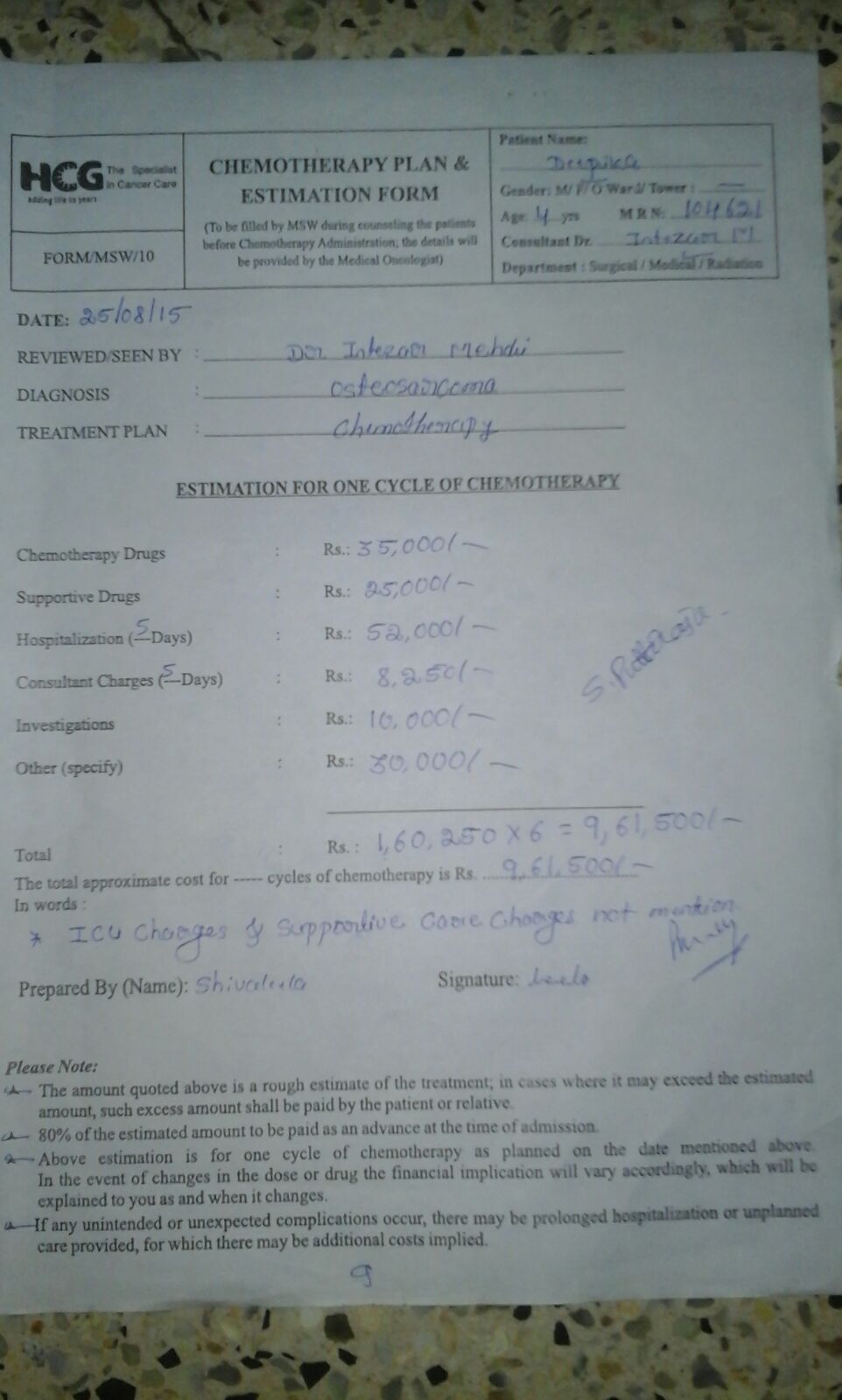