India's first female cyclist to clinch a world ranking of number four is also a Tsunami survivor. And she needs a cycle. | Milaap

India's first female cyclist to clinch a world ranking of number four is also a Tsunami survivor. And she needs a cycle.

Shares
Shares
Share on whatsapp
Deborah Herold has gone where no other Indian cyclist has. And it's a long way from a childhood rent apart by a tsunami.

Twenty-one-year-old Deborah Herold is a picture of concentration as she ties a lifting belt around her waist. She takes her time to adjust the buckle while taking languid steps to the barbell. As her trainers slip in weight discs on either side of the slender rod, she fidgets with her palms and then wraps them around it. Doubling up, she waits—almost meditatively—with only a few twitches in her muscles hinting at the impending snatch. Then, as she squats to lift the weights, she spots the camera lens focussed on her. In one moment, the intensity snaps and she breaks into a toothy grin.


Cameras have been on Herold’s trail since November 2015, when she became the first Indian cyclist to climb to world No 4 in individual rankings in 500 metres time trial, according to the Union Cycliste Internationale (UCI), cycling’s global governing body. Her achievement came after the Track Asia Cup in New Delhi in November, where she won three medals, including gold in the women’s elite sprint. Herold also became the first Indian cyclist to qualify for the prestigious Track Cycling World Championships held in London in March, where only the world’s top 20 cyclists make the cut.

But Herold wears her rapid, spirited rise lightly. She’s candid about her struggles in a big city, with language in particular, and admits that she’s made progress from last year, when she would only gesticulate. She doesn’t have much of a life outside the velodrome, except the odd outings on Sundays. But that’s all right, because the cycling arena feeds her singular obsession: Speed.


Herold herself didn’t have cycling ambitions till some years ago. Till then, hailing from a family of meagre means, hers was a story of any other Nicobarese tribal—modest and listless. Till came the morning after Christmas, 12 years ago, when their lives turned upside down. On December 26, 2004, 9-year-old Herold and her brother, three years younger, were woken up by their mother around dawn in their Car Nicobar home. By then, the earth was writhing from a quake measuring 9 on the Richter Scale somewhere off Indonesia.

The Andaman and Nicobar Islands, an archipelago out in the Bay of Bengal, were bearing the first brunt of the quake on Indian landmass. As furniture tumbled around them, Herold’s mother lifted her children in her arms and ran out. Before she could move to safety, towering tsunami waves swallowed the northernmost region of the Nicobar islands, and, as the water pummelled in, Deborah slipped from her mother’s grip. Herold didn’t know how to swim and no one around stopped to give her a hand. The only thing she could think of doing was to climb the nearest tree.

That was where she remained perched for the next five days, watching the water rise and ebb. “I was hungry and there were a lot of mosquitoes. But I just hung on,” says Herold. Once the water receded, and the search parties and her parents came looking for survivors, she cried out. “My parents had given up hope. They thought I was dead. But not me. I never felt that I would give up.”

Giving up isn’t Herold’s thing. She fought through the aftermath of the tsunami devastation, helped her family rebuild their lives. Her survival instincts shone through once again when she began cycling and was uprooted from Car Nicobar and brought to the national capital, a city 10 times the size of her home. Apart from honing her skills on her bike, Herold used her three years in Delhi to pick up a working knowledge of English and meld into the Indira Gandhi Sports Complex hostel, which houses trainees from all corners of the country.


Today Deborah has earned her laurels this year as well, winning three gold medals at the Track Asia Cup in Delhi. She is crowdfunding to purchase a custom-made cycle that can help her participate in the upcoming Track Cycling World Cup in Glasgow. Deborah needs to purchase a cycle worth INR 7 Lakhs to be at par with her competitors from different parts of the world. With the right training and exposure, she believes she can achieve glory and make India proud. She is also planning to represent India in the Tokyo 2020 Olympics.

The first version of the article written by Kathakali Chanda originally appeared in Forbes India. 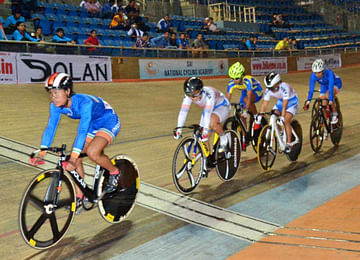