Shares
Shares
Share on whatsapp
7-year-old Basvaraj is a curious child, he asks lots of questions on everything new he comes across. To ensure his hunger for learning things doesn't fade away, his parents despite themselves being laborers made sure he gets an education. However since last one year the only questions Basvaraj asks is "What has happened to me, and when will I go back to school".
Basavaraj at home

"My little boy has cancer"

From being loved for his curiosity in school, His movement is now limited to the premises of his house reason, Basavaraj has been diagnosed of Blood cancer and his medical condition does not allow him to be that happy, curious, intelligent, playful kid he used to be.
Seeing the terrible ordeal of Basavaraj and his family, Basvaraj's School's Director came forward and has left no stone unturned to save the life of this bright kid. However, none of the efforts have given the desired outcome so far. The only way the child can be saved is through raising enough money for the treatment.

To his parents, Revannappa and Sangeeta, Basavaraj looked fine. There was just a swelling in his stomach – but he seemed all right otherwise. His classmates teased him about it and even his teachers noticed it. One teacher, in particular, wanted to make sure his parents got it checked out.

"Even treating a small swelling was expensive for us, how could we possibly manage our childs cancer treatment" - Revannappa

"He will not make it without treatment"

Basavaraj's parents are migrant laborers in the small village Tadavalaga in Bijapur, Karnataka. Revannappa goes out looking for work in and around Tadavalaga. His wife Sangeeta works as domestic help in houses nearby. Together they manage to make Rs 10,000 per month to take care of their children Basavaraj and Pallavi.

"With great difficulty, we are managing our children's education, how could my daily wages suffice for my childs treatment"

When Basavaraj's teacher came home to tell them that their son needed to be taken to the hospital – their first response was that hospitals were for people with money. Their son didn't 'look' sick. But their son's teacher Kallad 'Sir' insisted.
Basavaraj with his parents and sister Pallavi

They took Basavaraj to the local clinic and the doctor ran a battery of tests on him. When he was diagnosed with cancer – his parents felt like they had as good as lost him. Cancer was a 'big' disease with expensive treatment.

"Thinking of my financial condition I felt the countdown has started. I might loose my child soon"

This teacher is trying to save his young student's life

Ningappa is one of the founding members of LP School in Tadawalagi. He started the school to give quality education to children in the village. To Ningappa, it was unthinkable to stand by as one of his students succumbed to cancer.

Ningappa enlisted the help of other teachers and convinced Basavaraj's parents to take Basavaraj to Bangalore for treatment. “His parents are very poor and he is a bright, happy child. Nothing else is more important than he get the treatment he needs,” he says.

Basavaraj with his teacher Ningappa

He raised some funds locally and gave all the support Revannappa and Sangeeta needed to continue Basavaraj's treatment. So far, the parents have spent over Rs 50,000 on treatment. Luckily, Basavaraj's sister is a perfect match and the cost of the BMT will be less. But they still need about 15 lakhs for the procedure – an amount they can never hope raise.

He will stay alive if he gets treatment

Basavaraj is happy because he has taken his medicines religiously and the swelling in his stomach is gone. He is looking forward to going back to school and playing with his friends. No one has the heart to tell him that to live, he must undergo a transplant.
For Revannappa and Sangeeta, Ningappa is a saviour who saved their son's life. He travelled with Basavaraj's family to Bangalore eight times and guided them in the big city. For the last one year, he has followed up with the doctors at Narayana Hrudayalaya making sure that Basavaraj's treatment is on track.
Basavaraj at Narayana Hrudayalaya, Bangalore 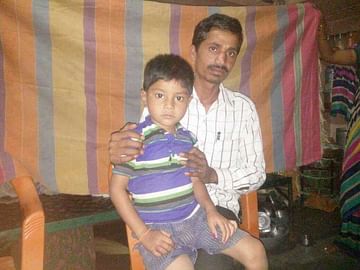 Basavaraj's parents are very poor to even continue his treatment.He needs our help.