With Just Two Days Left To Get A Life-Saving Surgery, This 2-Month-Old Is Fighting For His Life In The ICU | Milaap
loans added to your basket
Total : 0
Pay Now

With Just Two Days Left To Get A Life-Saving Surgery, This 2-Month-Old Is Fighting For His Life In The ICU

“Just when we thought he was getting better, he stopped feeding. It only got worse with time. His stomach is so painfully swollen now. He can’t breathe or feed on his own. He has tubes all over his body. For 2 months now, my baby has been in the NICU. The only thing that can save him is an urgent surgery. He needs the surgery on Saturday, but we have nothing left to save him.” - Santosh, the baby's father

Santosh and Mamta’s day begins and ends in the waiting room of the hospital. Where once there was excited chatter about baby names and shopping lists, now there’s only a deafening silence between husband and wife. All they think about is their 2-month-old baby boy who’s fighting for his life in the NICU. As he struggles to breathe, feed or even cry out in pain, Mamta and Santosh can’t help but break down every time they see their little one. Their baby needs an urgent surgery on 28 July to survive.

Their baby boy’s life began in extreme pain, and he won't make it without surgery

Every morning, Mamta crossed off a day on the calendar. Santosh and she were eagerly waiting for her due date. Unfortunately, in the seventh month of her pregnancy, Mamta felt a piercing pain in her stomach. She was immediately rushed to the hospital and her twins were delivered through a c-section surgery.


“We’re blessed with a baby girl and a baby boy. When they were taken to the NICU immediately after birth, we were worried. In the hospital, we met many parents who were going through what we are. They would wait the entire day in the hospital like us, but soon they started taking their babies home. That gave us hope. Our baby girl started showing improvements. She was removed from the ventilator. We finally breathed a sigh of relief, but 10 days ago, our baby boy’s condition deteriorated.”

Mamta and Santosh’s baby boy has a large bowel obstruction, a condition in which there’s a blockage in the large bowel that prevents food and gas from passing through. The obstruction also cuts off blood supply to the bowel, causing the painful swelling in his stomach. The only thing that can save him now is a surgery but it's beyond their means.

“Whenever we see our baby in the NICU, I talk to him. I tell him that he will be fine and that I will take his sister and him home soon. But I don’t know how I can afford the surgery. The daily expenses of the NICU are much more than I earn in a month. I’ve spent everything I had in these past two months. The surgery is out of my reach, but it’s the only thing that will give our son a second chance.”

Santosh works as a caretaker in a small shop and earns around 5,000 per month. Despite many hurdles, he somehow managed to get his twins treated for 2 months, but now he has nothing left to save his baby boy from death.

Mamta and Santosh’s baby boy needs an urgent surgery to remove the obstruction in his large bowel and survive. With just two days left for surgery, Santosh has no way to arrange the amount required for the life-saving procedure. Mamta and Santosh are desperate to save their baby, but can’t do it without your help.

Your support will save their 2-month-old baby’s life. 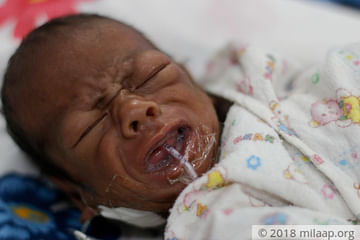 With Just Two Days Left For Surgery, His Parents Are Struggling To Save His Life

Their baby boy needs an urgent surgery to survive, but they have nothing left to save him.