At only 22, Viji was able to start a five-person sari printing business | Milaap

At only 22, Viji was able to start a five-person sari printing business

Shares
Shares
Share on whatsapp
I went to Viji in her village in the district of Uppiliyapuram, about fifty kilometers outside of Trichy. We sat on the bench attached to the outside of her house; my feet resting precariously close to the drainage ditch that was holding stagnant grey liquid. It was about 3 o’clock and the South Indian sun was relentless. Viji must have noticed the sheen of sweat that was on my forehead, because she ushered me inside after only five minutes of talking outside. We sat in the central room of Viji’s house, a relatively large room with a floor composed of colored stones arranged in a star design. Viji’s mother-in-law, who popped in and out of the central room throughout my conversation with Viji, told me that the house had been in the family for five or six generations.
Viji has two sons studying in the 4th and 5th standards who attend a nearby government school. Her husband carves temple sculptures out of stone, such as temple located a few hundred meters from their house. Although roughly half of the men in her village are agricultural laborers, about quarter are stone workers like Viji’s husband: an unusually high percentage. In addition to being housewives women in the village a variety of jobs variety of jobs, including tailoring, bag weaving, government-sponsored labor, and agricultural labor.
The conversation moved to Viji’s sari screen-printing business, which she started with four other women with a loan from Milaap. She told me that they sell directly to customers, rather than to a store. Their 150 customers are primarily “teachers, panchayat (village) office lady staff, and government employees.” Each customer usually gets about seven or eight new saris per year, often for special occasions such as the New Year, Pongal festival, holidays, weddings, birthdays, etc. She picked up one of her saris to show me some of her work, her hands stained red from screen-printing dye. The completed saris range in price from Rs. 300-600, depending on the quality of the fabric used. Viji’s business seems to be running smoothly thanks to her loan from Milaap. 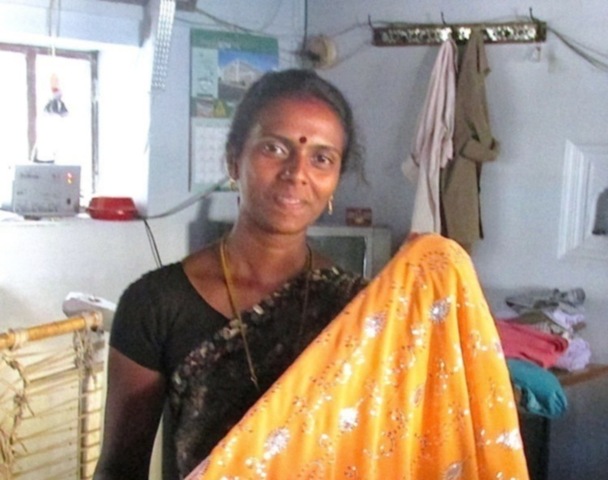