Only You Can Save This Diploma Student Who Is Suffering From Brain Trauma After A Road Accident | Milaap
loans added to your basket
Total : 0
Pay Now

You are sending a message to
Deependra Singh
Go back

Shares
Shares
Share on whatsapp
Arun and his bike were found on the road on December 10. He had met with a terrible accident. His head and the left side of his body were badly injured. He was rushed to the hospital where he lay in a critical condition until his family reached from Kanpur. Once, they gave consent, he had a surgery without which he would have died. Despite the difficult start, Arun beat the odds and came back strong. He needs another surgery to get back on his feet.


Arun is fighting for his life at the hospital

Arun's parents were told about his accident at 2 A.M. in the morning

When Arun met with the accident – the first to be informed was his roommate and friend from school Dipen. Dipen informed his family and made sure Arun was taken to a good hospital where he got first-aid for his injuries and the tooth in his lungs was removed.

"We woke up at 2 A.M. because the phone would not stop ringing. It was Dipen. I could not even believe what I was hearing. Arun was in the hospital and he needed surgery. Dipen said we needed to get money. So we went and woke our neighbors to borrow money and in 3 hours, left for Noida."

Arun with his mother and his nephew at home

“We thought it might be a bad fracture. When we reached the hospital, we realised he had almost died. We found ourselves in a completely bewildering situation. We didn't know what to do. We tried to find a cheaper hospital but none could handle a case this serious. And the doctor did not give us any hope,” explains Ankit, Arun's older brother.

All the money they had was deposited at the hospital and their father immediately left for Kanpur to borrow more. Arun's brain surgery was delayed by almost 24 hours. Yet, miraculously he regained consciousness. He needs another surgery to be out of danger but there seems no brain damage and his prognosis is good.

Arun's father is a mechanic and his older brother has a menial job back home in Kanpur. Arun lives in Noida and is putting himself through a diploma in mechanical engineering. He works part-time to support his education and himself. Arun is known for his cool head and his commitment to his life goals among friends.

His accident has shattered a carefully built fresh start for the family. “My sister passed away four years back. She was the youngest and every one's darling. Just when we all felt that the sorrow of her death was getting easier to deal with, Arun's accident happened."

“My parents cannot go through losing another child. Without thinking of the future – we borrowed close to Rs 9 lakhs for his treatment. We thought he the first surgery would save him but he needs another one for his brain. We are just thankful he didn't lose his memory or have a coma,” says Ankit.

Aruns parents pray day and night for Arun to come back to them. Even his friends have come together to try and raise funds. But Arun needs help at the soonest and cannot wait any longer for extra funds.

Arun needs almost 6 months of treatment and his parents have exhausted all their resources. They have nothing left for his upcoming major surgery. Crowdfunding is their only hope for saving their son.

Your contribution can help this family save their son from succumbing to this trauma. 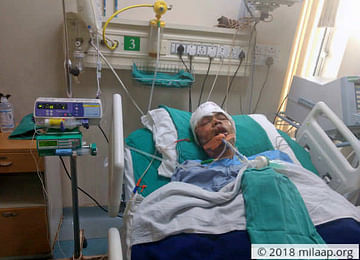 Help Arun get a brain surgery

Arun has fought hard to recover from an a road accident. With your support he can survive.