Art Of Saree Weaving: Its Much More Than What Meets The Eye | Milaap

Art Of Saree Weaving: Its Much More Than What Meets The Eye

Shares
Shares
Share on whatsapp
The following post has been written by our Fellow, Surya, who is working closely with our field partner, Mahashakti Foundation in Bolangir, Odisha.

Did you know that in India, six and a half million people are engaged in saree weaving? Has this left you wondering what really happens behind the scene at a saree weaving workshop till the final output is ready? 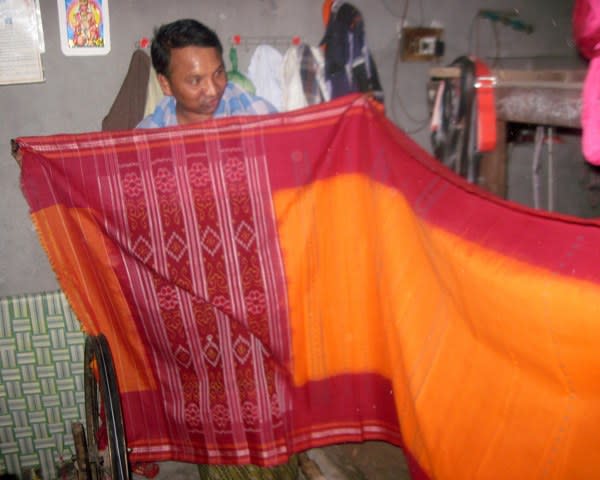 I had the opportunity to witness this marvelous process when I met some of these artisans in a village close to Khariar in Nuapada district of Odisha. Thanks to Mr. Martin the assistant manager of  Habitat for Humanity (India) and the M.D of  Mahashakti Foundation, Mr. Jugal  Pattnayak who decided to take me along for the field trip.

The following blog will definitely leave you mesmerized. It showcases the entire process of saree weaving through the eyes of a weaver.STEP 1:  As we entered the house of a beneficiary, we were greeted by a beautiful pattern of hundred spools. In fact, this pattern marks the initial step in the weaving process. These spools contain thread yarns made from cotton.  After the spools are loaded onto a wooden frame, the threads are fed through wooden rollers of the warping machinery and rolled (See the image 1 below). This process gives rise to a strong thread yarn to be loaded longitudinally in a handloom called the warp.  The warp generated this way is a spiral warp formed by winding the warp ends (each individual warp thread is called a warp end) around a circular wooden shaft called the warp beam. (See image 2)

Weavers working on the warping machinery to produce warp

The thread yarn ready to be fed into the warping machinery. In the background, finished warp wound on the warp

A warp beam loaded on the handloom with the warp held in tension. Also, warp ends passing through eyes holes of the heddles may be seen.

STEP 3: The latitudinal thread yarn which runs perpendicular to the warp in a handloom is called the weft. The weft is not held in tension; it doesn’t need to be as strong as the warp. Hence, the thread used as weft is created using a simple spinning wheel or Charkha as we commonly know it in India. (See image 4 below)The weft thread is then loaded onto a quill which in turn is placed in a tool called shuttle.

A weaver working on the charkha to create thread yarn to be used as weft.

The shuttle tool with quill and weft inside it. (Not loaded on the handloom)

The raised warp ends passing through the heddles and the shed created are seen clearly in this picture.

Step 5: The shuttle runs perpendicular to the warp along the shed filling it with weft thread.  A single movement of the shed is called pick and the process is called picking. As the shuttle moves back and forth through the shed, the warp and the weft are interwoven to produce a cloth, in this case, a sari.

A shuttle with weft loaded on a handloom.

The shuttle will pass through the shed, filling it with weft perpendicular to warp.

Step 6: The finished part of the sari then passes through a comb like frame called reed. As the shuttle fills the shed with weft, the reed presses the weft thread against the portion of cloth already formed. This process is called battening. The sari generated so is then rolled on a wooden beam at the bottom of the handloom called the take up roll. This process is called taking up.

The frame on which the weaver lay his left hand is the reed.

The take up roll is seen at the bottom of the handloom.

Each sari produced by weavers here takes about 8 hours to finish from the start. On a typical day, each weaver produces one sari. Each sari is sold to traders at a price between Rs. 600 and Rs. 800 depending on a variety of attributes of the sari, such as material, design, complexity, etc. Of the total price at which a sari is sold to the trader, about 50% constitutes the cost of the material while the remaining 50% covers the labour cost and profit margin of the weaver. (Also do take a look at Jennifer, a budding entrepreneur's story.) So, on a day, each weaver can earn up to Rs. 500. However, due to weak supply chain, the weavers are yet to realise a stable demand for their produce.  At times, they are forced to sell the saris at a loss. Among a host of other problems, a major one plaguing these poor weavers is the shortage of capital to purchase raw materials or to maintain their handlooms and warping equipment.

A weaver with a finished sari.

There are several ways in which you can also be a part of such initiatives.  Milaap, which has given Energy loans in partnership with Mahashakti Foundation, is still experimenting on Enterprise Development loans in the region through a pilot program. If the program goes successful, there emerges a vital opportunity for the weavers to augment their business and hence, improve their lives with the help of Milaap and MSF.