Anjali Devi has built two toilets, for her and her son's family. | Milaap

Anjali Devi has built two toilets, for her and her son's family.

I went to Velakanatham, a village some fifty kilometers from Tiruchirappalli, to meet Bhuvaneswari, the leader of a JLG from this village, on a cool Monday morning. But since she was unavailable, the field officer took me to Anjali Devi's house, a member of the very same JLG. It's been a year since she took the loan from Guardian, Milaap's partner, for the purpose of constructing a toilet in her house. She makes a monthly installment of Rs.650 every month. Anjali Devi and her husband are both daily-wage laborers and make close to Rs.6,000 in a month. She has two sons and one of them is married. There are totally five members in  the house. Before starting to use the toilet, that they just finished building, they'd been going to the closest fields, some half a kilometer away, to relieve themselves. Multiple trips in a day made life much harder for them. Frequent trips at night as it wasn't safe for them to travel to open fields at that hour. Monsoons also made the use of fields to relieve themselves very unhygienic. When she heard of Guardian and that they give loans to set up sanitation facilities at home, she contacted them and availed the loan. She has started the construction of one toilet when she decided she'll built another one for her married son, since it would be much more hygienic that way. Now that they have not just one, but two toilets of their own, the entire family enjoys a greater sense of privacy and cleanliness. Cases of dysentery and diarrhea in her house, caused due to the perils of open-defecation, has also come down drastically. Anjali Devi and her family leads a happy and healthy life. 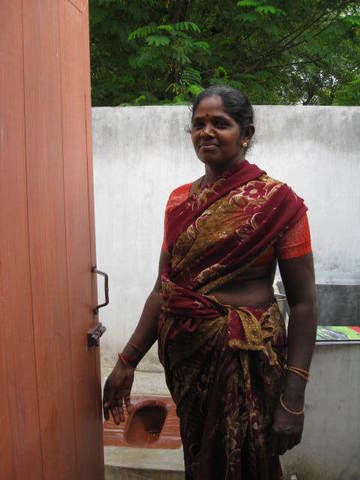