7-Year-Old Who Has To Be Rushed To The Hospital Every Week Due To Severe Bleeding Needs Urgent Transplant | Milaap
loans added to your basket
Total : 0
Pay Now

You are sending a message to
Azim Firfire
Go back

Shares
Shares
Share on whatsapp
When little Adnan’s legs and arms start shivering, his mother, Naziya, knows that it’s a sign. A sign that something bad is going to happen to her little one. Within minutes, he starts bleeding from the nose and cries loudly in pain. Adnan has a rare blood disease called Wiskott Aldrich syndrome, as a result of which has an abnormally low platelet count. Without proper treatment, this can turn fatal.


“Sometimes we don’t even get the time to change clothes or comb our hair. We just pick him up and run to the roads to get the nearest auto. The doctors have told us one thing clearly – whenever he starts bleeding, he has to be taken to the hospital as soon as possible or he would die. Earlier, we had to take him only once in a few days, now we have to take him every week. He can be cured with a bone marrow transplant, but we don’t have the means for it,”-Naziya, mother

Where the normal platelet count should be 1-1.5 lakh, Adnan’s has always been less than 50,000 since birth

Adnan was born healthy. His mother does not recall him having any grave health problems until he started passing bloody stools when he turned 7 months old. His parents took him to many doctors in Mumbai, but most of them said that it that would soon pass. As a result, they did not pay much attention to it. However, when the baby’s legs began shivering even in the warmest of Mumbai summers, Naziya and her husband Imran knew that this was not something to be ignored. They went to many specialists again, before their child was finally diagnosed.

“When he was diagnosed as a baby, his platelet count was 50,000. But it has been dipping drastically since then. Now, it is less than 20,000. It is a miracle that he is surviving. But he won’t for long without a transplant,”-Naziya

Adnan’s parents were told that he could be sent to school based on one condition: the teachers had to monitor him 24/7, looking for any paleness red marks on his body, etc that could indicate a dip in platelets. So from his LKG days, he was always assigned an aayah (maid) at school, who knew about his health issues well and even accompanied him to the toilet. But one day last year, his aayah missed the fact that Adnan’s legs had turned bloody red – like he had been wounded – as he had been wearing socks.

“The child was in pain but he refused to tell anybody in the fear that he would be told to go to the hospital. When we found out, we rushed him to the hospital where doctors said that his disease has advanced and that he shouldn’t go to school for a while due to chances of catching deadly infections. He has been very sad since then – he misses his teachers and friends, but his life is more important to us”-Naziya

Imran has been spending a bulk of his salary on Adnan’s treatment so far, needs your help to save him

Imran works in the Gulf as an electrician. After paying his room rent and buying just enough food to survive, Imran is able to send just Rs 25,000 to his wife and kids, Ayaan (10) and Adnan (7) back home. Every time Adnan gets admitted at the hospital, the minimum bill amount generated is Rs 25,000. This means that everything Imran sends is spent on Adnan’s treatment.

“On many occasions, we had to beg our relatives to give us some groceries or food. I had to feed my children at any cost. Those were my circumstances. Now, my husband is here on leave, but he is not financially equipped to pay for this transplant. We don’t have any other way but to depend on crowdfunding,”-Naziya

With your kind contribution, these poor parents will be able to save their sweet child from bleeding to death 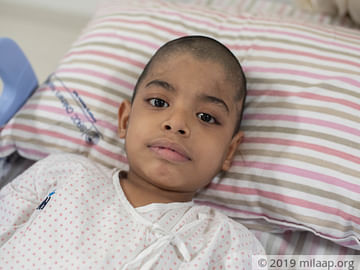 Adnan's Platelet Levels Are At An All-Time Low Now

UPI: rzpy.givetomlpadnanfir001@hdfcbank (Copy to clipboard)
Or
Click here to read the instructions before you make a bank transfer.