2-Year-Old Abdul’s Cancer Is Rapidly Spreading To The Rest Of His Body And Only Immediate Treatment Can Save Him | Milaap
loans added to your basket
Total : 0
Pay Now

Shares
Shares
Share on whatsapp
2-year-old Abdul was diagnosed with cancer in his stomach last month, but within days, cancer has rapidly spread to the rest of his body. Sarmin and Didarul are heartbroken. Their once happy and playful child is now too weak to even walk on his own.

While Abdul lays on the hospital bed getting chemotherapy, his parents not only worry about his life but also about how they’re going to pay for the rest of his treatment. Abdul is running out of time. He needs chemotherapy, surgery and a bone marrow transplant to survive. It’s his only chance to beat cancer.

Abdul’s cancer began to spread within days of his diagnosis

Back home in Bangladesh, Sarmin noticed that her son had suddenly stopped eating. She couldn’t even get him to eat his favourite food. A few days later, he had lost weight and was too tired to play with his sister. Sarmin and Didarul were worried, but they never imagined that their son was clinging to life.

“I heard the word cancer and completely froze. I didn’t know what to say. Just a few days ago he was active and healthy. The first thought that ran through my head is that he’s too small to fight such a deadly disease, but my baby is strong. He might be weak now, but I know he will make it with treatment.”

Abdul’s tumour in his stomach has now spread to the rest of his body. Abdul has started his first cycle of chemotherapy, but he needs 8 more months of treatment, along with a surgery to remove the tumour and a bone marrow transplant. Abdul’s tumour is aggressive. If it spreads any more, he might not make it.

Cancer has brutally taken away the happy childhood that Abdul knew

“Abdul was such a cheerful child. He loved to cycle and play with his sister. His laughter used to light up the entire house. Now, even if we take him to the playroom in the hospital, he doesn’t play. We’re trying to keep his spirits up, but cancer has completely changed my child. Now, all I see is sadness and pain on his face. He’s terrified of needles and cries every time a nurse or doctor even comes close. He just wants to go home, back to the love and laughter that was once a part of his life. I look at him and all I think about is how I have to take him back home healthy. There’s no other option.”

Abdul can be saved with treatment, but Sarmin and Didarul find themselves helpless

Sarmin and Didarul took Abdul all the way to Bangalore for his treatment. They knew that it was his only chance of survival. Abdul’s battle against cancer has only just begun. He has a long road ahead of him, but if treatment is continued, Abdul can recover, and his parents can finally take him home.


“My husband is devastated and cries every time he sees Abdul crying. Now I have to stay strong. I keep telling him to be positive and hope for the best, but even I know that if we can’t pay for his treatment, our son doesn’t have long to live.”

Didarul works in a small vehicle shop to try and support the family of four. They have sold whatever little jewellery they had to try and pay for Abdul’s treatment so far, but are now falling short. They need all the help they can get to give their little one the treatment he deserves and save his life.

Abdul has a tumour in his stomach that is now spreading to the rest of his body. He has started his first cycle of chemotherapy, but that isn’t enough to save him. He also needs a surgery to remove the tumour, followed by a bone marrow transplant. While he has a long way to go, Abdul can make it with timely treatment. However, his parents can’t afford the 22 lakhs needed for his treatment. Abdul needs your help to survive cancer.

Your support can save Abdul’s life. 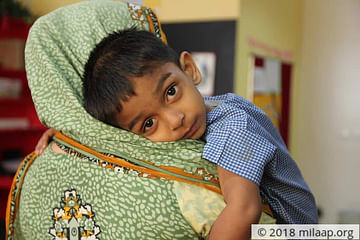 Abdul needs your help to get immediate treatment to fight the tumour in his stomach.

UPI: givetodidarulalam@yesbankltd (Copy to clipboard)
Or
Click here to read the instructions before you make a bank transfer.