His 2-Year-Old Will Never Hear Again If He Doesn’t Get An Urgent Surgery, You Can Help | Milaap
loans added to your basket
Total : 0
Pay Now

P
You are sending a message to
Pounniamourthy
Go back

His 2-Year-Old Will Never Hear Again If He Doesn’t Get An Urgent Surgery, You Can Help

Shares
Shares
Share on whatsapp
When Yuvanesh was 1, his parents found out that he was not responding to  any kind of sounds nor talking like any other children of his age. That's when doctors told them that their son had lost the ability to hear in both his ears.

"When the neighbourhood kids talk, sing rhymes and laugh he just stands there looking at them longingly. He yearns to be like them and it kills my heart to see him get upset because of this. All I wish is to hear him call me “Appa” soon. He tries to lip read what we say to him but he fails to talk back. He can understand that he is incapable of something and starts crying when he gets tired of trying”- Punniyamurthy, father.

Yuvanesh had lost his hearing abilities at birth but no one could diagnose that then. The parents repent that now, a lot. He had high chances of getting back his hearing ability if he had Bilateral Cochlear Implantations when he was 6 months old. But back then, his parents were not aware of this disability.

Priya, his mother, thinks it's her fault. She had chicken pox in her fifth month of pregnancy and three days before the appointed date, the child had to be delivered through C-section. She thinks Yuvanesh is now suffering because of her.

If he gets a surgery before he turns three, he can hear and start talking soon

“My boy is such a bright and expressive kid. Before we knew about his ailment, we thought he was responding to us through sounds but he was actually learning things through eye contact and gestures. He is so smart. He plays games on my mobile all the time. I taught him once how to make paper boats with gestures and the next day he started making it on his own” - Punniyamurthy, father

Yuvanesh is brilliant enough to mimic what he sees but unfortunately, his communication ends there. He cannot hear, he cannot verbally repeat what he hears - he can't respond to his parents' calls.

Punniyamurthy is doing all he can to treat his son. He comes from a small village that doesn't have hospitals. The doctors at Miot Hospital has promised that his son can hear again but the treatment costs 16 Lakh rupees. He cannot afford this much amount even if he borrows money from everyone he knows.


He has no option left and he is trying hard every day, pleading for money from his friends and family for the treatment. Your compassion can help a father’s dream of seeing his son talk and hear get fulfilled. Kindly help his child by giving him the gift of voice and sound. 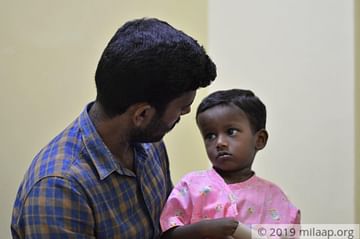 Despite Selling His House And Bike, This Father Can't Afford His Son's Surgery

Yuvanesh is 2 and he needs a surgery at the earliest to hear again. With your help, he can