When you teach a woman to weave | Milaap

When you teach a woman to weave

Shares
Shares
Share on whatsapp
I met Suseela Manoharan at her house in Vairichettipalayam, a village about fifty kilometers outside of Trichy, Tamil Nadu. When I walked through the narrow passageway that opened up into her courtyard, Suseela was sitting among piles of colorful, plastic wire bags while weaving away along with her four neighbors that also got loans from Milaap. Although an individual activity, weaving seemed to be more enjoyable when done in a group setting, so I asked Suseela if they all usually weave together. She said, “It depends on the day, sometimes we stay in our own houses and work separately, but some days we all work together.”
Suseela lives with her two sons and her husband, who bikes five to ten kilometers to work every day as a residential mason. One of her sons is studying in the 12 standard, and the other completed his bachelors of engineering degree last year. When we started talking about her bag weaving business, and I wondered why there were so many bags covering the front of her house. “It is the dull season,” she said, “in April and May we sell all of these bags.” Then she took me into her house and opened up a storage room, which was stocked with more bags. They sell bulk orders of 500 – 1000 bags to a store in Bangalore, as well as selling to local stores. People use the bags for a variety of reasons, but they are especially popular among the school children, who use them to carry their lunch.
Although there were bags of different sizes and colors, only a close inspection (and a hint from Suseela) revealed that the quality of plastic wire varied between bags. I had never seen bags like these in the U.S., and Suseela had such a broad selection that I actually bought a few to bring back to my family as gifts.
As I finished the cold bottle of mango juice that they had given me, her older son asked me if I knew anybody in the U.S. who needed an electrical engineer or anybody to work in I.T. I thought that he was just joking around, but I quickly realized that he was genuinely looking for work. Doubtful that I could actually help him find a job in the U.S., I had to be content knowing that at least his mother’s bag business was flourishing. 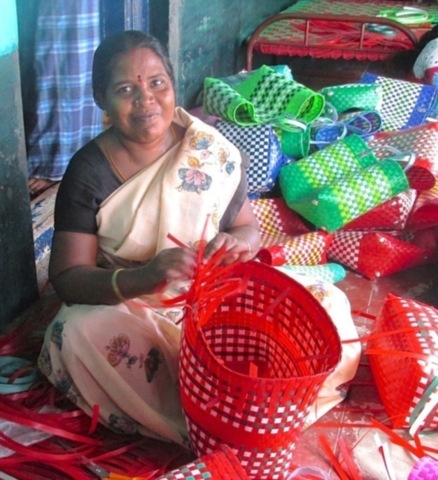