This rural entrepreneur is putting a roof over her neighbors’ homes

Shares
Shares
Share on whatsapp
That morning, there was a strong scent of rain in the air. The various potholes on the road were filled with water, making look like the road was dotted with tiny ponds. It was clear that it had rained all night, and that the rain had left behind a muggy mist through which our bike was traveling. I myself was clutching to the hand bars on the back of the motorcycle for dear life as the driver, Mr. Arup Ghosh, the head manager at Sreejan, weaved through the crowded street. Today, we were on our way to meet with Kakuli Hazra at her weekly group meeting where all the ladies of this particular group met to deal with their loan repayments and other issues.

We reached the home where the meeting was being held and took our seats next to the ladies. One of them ran off and came back with a chair and a hand fan for me because I clearly looked like a mess. I insisted on sitting on the mats or "madurs" on the ground with the rest of the women but gratefully accepted the hand fan. All of the women were gawking at the fact that I started writing with the pen in my left hand. One of the ladies raised her hand and politely yet seriously asked why I write with my left hand. It seemed like they had never seen such a thing and were slightly concerned. I explained to them that it wasn't a big deal and that many people around the world did things with their left hand. I’m still trying to get to the bottom of this left-land taboo here, but I'll save that for another date.

After some of the official loan business with Sreejan was taken care of, I got a chance to talk to Kakuli Hazra who had taken a loan through Sreejan and Milaap for her construction business. She explained to me that her husband builds homes for many of the people that live in the area. His specialty is raising shingled roofs for many of the homes that earlier only had a metal or plastic sheet covering them. On the way to the meeting, I had noticed some of his handy work on some of the houses and was quite impressed. Kakuli explained that she also assists him with much of the work because they were not able to hire other laborers.

I was fortunate to be able to talk to Kakuli's husband, Ranjit, who had come to the meeting to discuss their finances with Mr. Ghosh. He had explained to me that the reason they had taken the loan was because the scaffolding he used to support the roof, also known as the centering pillar, was damaged in an accident. Many of their other tools had been destroyed during this incident, and a lot of their projects had to be put on hold. After receiving the loan of Rs. 10,000 for equipment repairs, Kakuli and her husband were able to continue their work more efficiently because, "We were able to purchase many of the quality tools we could not afford before," they explained. They are hoping that their increase in income will able to help them pay for their children, Chinmoy (5 years) and Supriti (9 years), to go to school and pay for tuition fees. They were very grateful to Sreejan and Milaap for the quick support. 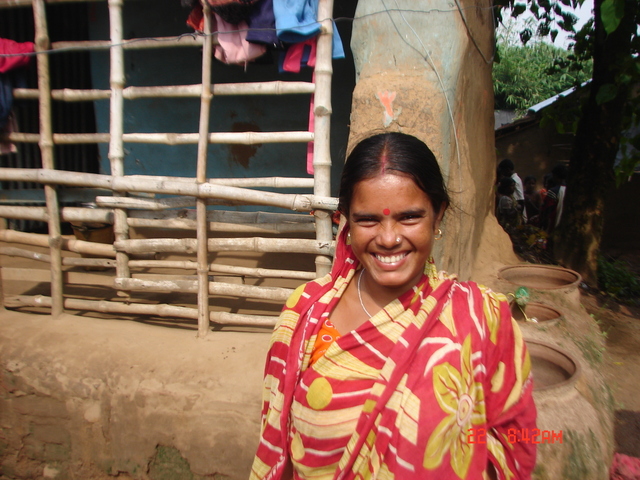 Kakuli Hazra gives a big smile for the camera.