The strong-willed woman entrepreneur from Dhrangadhra

The day was quite beautiful and the sky looked like a dome of plasma blue. One glance at the roads of Dhrangadhra and it was enough to comprehend how intense the downpour had been in the past few days. There were puddles all around. Dhrangadhra, a small town in the Surendrangar district, in the state of Gujarat, stands as a town with quite a long history, and is also very well-known for its artwork.

One more thing that makes this town so distinctive is the sheer number of rising women entrepreneurs here. Not only are these women running their small businesses of artificial jewelry (also known locally as ‘cutlery’), embroidery, and garment and cloth selling, they are also running these businesses successfully. It took a couple of minutes to reach the house of one such woman, Labhuben, who had borrowed from Milaap’s lending community to fund the capital necessary for investing in her business. I was surprised on seeing how full of mirth this 46-year-old woman is. The moment I stepped into her house, she welcomed me with a big bright smile. Her five-month-old granddaughter Manisha, whom she adores a lot, was the reason of her apparent delight.

Labhuben has been running her cutlery business for two years now. Besides that, she also works for an Anganwadi (courtyard shelter). She travels to places nearby, such as Ahmedabad, every 15 days or so in order to buy the ‘cutlery’ or artificial jewelry items at wholesale rates, and then she sells it in the nearby towns and villages. I was quite intrigued to know how much and till what extent had she expanded this business in a period of two years. Upon asking, Labhuben who had a taken a loan of Rs. 17,000 from Milaap four months back, shared that this time the loan taken by her was utilized in order to pay one of her previous debts – a loan taken for building her house. The previous two times that she had borrowed an enterprise loan, she had judiciously invested the money in order to grow her business. But this time, with a new baby coming, she changed her mind and decided that building her house was a priority.

When I asked further about her intentions for her business and the growth she needed to achieve, Labhuben said that now that her house has been built, she wishes to take another loan and start a new business of selling saris along with the cutlery one. Somehow, her sincerity and conviction inspired a sense of confidence that this was a genuine exception, and she would use her next enterprise loan purely for the intended purpose of starting her sari business – her desire to start this business coming across pretty strongly from the manner and detail in which she spoke of her plans. 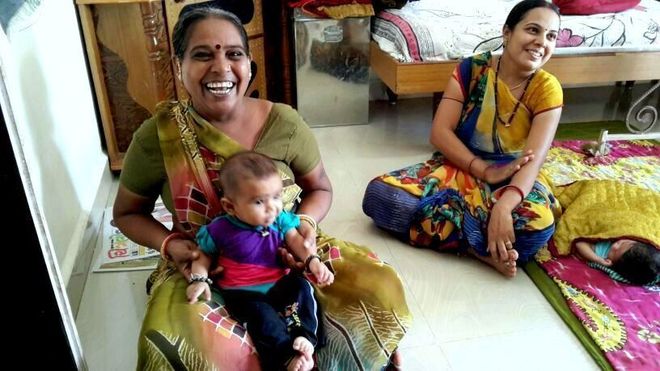 Labhuben all smiles with her granddaughter