Shares
Shares
Share on whatsapp
Thanmay is just 16 months old. He was diagnosed with liver tumour when he was just 10 months old. His father, Manjunath, is a driver and his mother is a home maker. Manjunath works extra hours and has managed to continue Thanmay’s treatment till now. Thanmay has to now undergo a liver transplant to get rid of the tumour.

Diagnosed With Liver Tumor At 10 Months

It was a mundane day in the lives of Manjunath and his wife. Manjunath was giving 10-month-old Thanmay a bath while his wife was busy in the kitchen. He noticed that there was something unusual about his stomach. “There was a hard lump in his stomach. I panicked and took him to the doctor in Tumkur who helped in his birth. He asked me to go get it checked out in Bangalore,” says Manjunath.
Several tests were performed to identify what caused the lump near his stomach. The reports came out and doctors identified a 14 cm tumor in his liver. In fact, the tumour was so big, they could not identify his liver.  Manjunath and his wife could not grasp the details when they heard this.
“Does it mean that my son should be operated? Will my son be saved? How will we manage the funds?” the distraught parents had several thoughts running in their minds. Manjunath didn’t know whether they should reveal it to the doctors that they were had financial constraints. He feared they wouldn’t continue the treatment.
“I first thought I will somehow manage the money. I was scared that they will think that we will not manage the funds and this will affect my son’s treatment. But I was wrong, we got a lot of support and guidance from them”, says Manjunath. 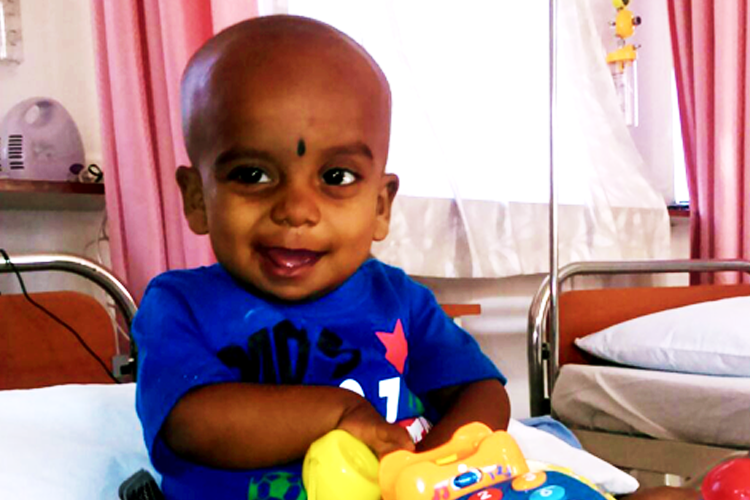 Liver Transplant- The Only solution

Thanmay’s tumor was 14 cm long. Since he was too small, it was difficult to surgically remove it. With chemotherapy and medications, the tumor size has been reduced to 7 cm. But the danger is still not over. He has to undergo a liver transplant. It was decided that the mother can be the donor. There is no danger in donating a portion of the liver. Liver cells grow back and the donor will be back to his normal life in a few months.
But, during following tests that the doctors found out that Thanmay’s mother was not a compatible donor. Luckily, Manjunath is a match and has decided to donate his liver. The family needs Rs 18 lakhs for the liver transplant. This is a huge amount for the family but they are trying their best to collet funds from friends and relatives.

This Father Works Nearly 24 hours to Save His Son.

Manjunath was working as a tempo driver but when Thanmay’s treatment expenses were shooting up, he decided to join the cab services to earn more.  He works the whole day so he can get paid well enough for the surgery and the recovery period when he will not be able to work.
“When I saw my son was suffering, I decided that I will do everything I can to get him back. I didn’t leave any opportunity to get earn some extra money, even if it meant working at odd hours or working the entire day”
Manjunath’s wife has also decided that she will find a job and support her husband if they cannot find a way to arrange money for Thanmay’s treatment. “I am ready to do any job to help my son. I can’t let my husband struggle alone. But I am worried about Thanmay. He can’t stay alone, who will take care of him? He cannot stay without me”.
Manjunath has to take care of his parents. His mother manages to make some money by peddling pappad on the streets. His father is partially blind and cannot support the family in any way. The family stays in a small rented house. So far, total expenses for Thanmay's treatment have touched Rs. 2.5 lakhs. Manjunath has taken a loan of Rs. 1.5 lakhs to meet some of the expenses. Thanmay has to undergo the transplant at the earliest as the chemotherapy sessions were completed few weeks ago.

When His Relatives Refused To Help

Initially, Manjunath’s relatives were ready to help but when they heard that Manjunath was the donor, they refused.  “They were willing to help me when my wife was the donor, but when they knew I was the donor, they refused. They are scared that something will happen to me and there will be no one to repay them back”, says Manjunath. Inspite of the best efforts of the doctors to explain, the relatives are not convinced. They don’t understand that liver donation is simple process and there is no danger to the donor.

How You Can Help Thanmay

With little hope left from his family, Manjunath desperately need to arrange funds. You can make a contribution and help him save his son. Funds collected through this campaign will be transferred to the hospital directly.
Supporting Document :-
All INR contributions are tax exempted under section 80 G and the donors can download tax exemption certificates after completing the payment.
Click here to learn how you can save Thanmay
Donate

Thanmay's father is a driver and cannot support the treatment. Your contribution will help him...