You are sending a message to
Shiv Prasad
Go back

Shares
Shares
Share on whatsapp
The problem with wheelchair tennis in India, says player Shiva Prasad, is that it is conducted as a charitable activity instead of competitive sport.The facilities are bare and the team is struggling. The Karnataka Wheelchair Tennis Association (KWTA) has 12 basic wheelchairs for over 30 players. Even that is sufficient because the Karnataka State Lawn Tennis Association courts at Cubbon Park gives KWTA only one court to practise on during the weekend.
The press of those wanting to practise means that international players like Shiva Prasad need to wait for their turn when they go to practice on weekends. But the waiting is nothing new to him as this is how he began his tennis sporting career. “I started playing wheelchair tennis is 2013. At first, I practiced moving on the wheelchair and bouncing balls. I got a turn at the court only three months later,” he says.
Shiva Prasad (second from right) playing with India's top wheelchair tennis players

Life changed by Polio
Shiva Prasad contracted polio at 2. By the time he was taken to the doctors, it was too late. After that he always needed callipers (special braces) and crutches to walk. Even that was thanks to early treatment.
His father, who worked in constructions, spent all his meagre savings on getting Shiva the treatment he needed. “I don't remember but I was in Apollo Hospital, Chennai for a month. I had an operation and my father carried me every where. My mother believes it is the reason I learnt better balance and motor skills,” he says.
A few years after that, Shiva Prasad's father had an accident that caused him to lose his job. He was bed-ridden for years, before he could walk again. In this time, Shiva Prasad who was 17, had to give up school to take up two part-time jobs to financially support his family.
Never losing sight of his goal
With his childhood friend Dilip who helped Shiva Prasad continue his sports practice

Determined to make something of his life, Shiva Prasad continued to pursue a correspondence B.Com. degree. Through it all, his constant companion was sports – the routine and the discipline never failing to steady his thoughts. “Near home, I played a lot of cricket with the neighbourhood kids. In high school, I was the cricket captain tasked with getting the others to play,” he proudly recalls.
Practice and a healthy lifestyle brought him to the notice of T. Seetharam, the pioneer of wheelchair tennis in Karnataka. “He told me I had good upper-body strength and asked me to come to the weekly practice. Slowly, I began to really enjoy the game,” Shiva relates.

Today, he juggles a full-time job with his practice and taking care of his mother. But for Shiva Prasad, the goal has always been to compete with the best.“I want to represent India internationally and play with the best. To do that I need to get an international rank that will give me private sponsorship. The two Asian Open matches at Bangkok and Malayasia are my best chances,” he says.
He already funded his travel to Bangkok Open held last year, winning runner's up in the Consolation Round. He put together this trip thanks to a few donations and sponsorship from his company. He has no coach and all his preparation for the trip was done through YouTube help videos made by wheelchair tennis world champions.
What inspires Shiva Prasad?
For Shiva Prasad, sports has been the equaliser that opened up his world. The rigours of the game calmed his mind and strengthened his body. For himself, he wants what any avid sportsperson wants – to represent his country internationally.
Shiva Prasad speaking to children in a local NGO about sports opportunities
“I don't feel disabled because I play sports. I see many struggling to follow a regime of physiotherapy and exercise to keep their muscles flexible and healthy, but thanks to sports, I've never had these difficulties,” he says.
Shiva Prasad would like to have a coach who helps him improve his game. He would like a standardised wheelchair to hone his precision. But for now, all he wants is a little help getting to the next international matches.
“I have the letters I need to participate. I only need help for transport. The Indian government reimburses only up to Rs 30,000 for air travel. I need help covering the rest of the journey,” he says.
Help this determined player make it to the Open tennis matches this October. Make his dream of representing India come true. Donate now. 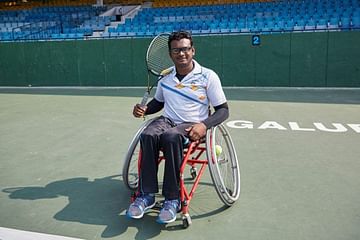 Your donation will help this talented player participate in the Bangkok Open and Malayasia Open.