Despite 15 Surgeries, 3-Year-Old Suraj Is Battling for Life Every Day | Milaap

Despite 15 Surgeries, 3-Year-Old Suraj Is Battling for Life Every Day

Shares
Shares
Share on whatsapp
Suraj was born to Sunitha and her husband after seven years of marriage. Her 3-year-old son has already undergone more than 15 surgeries till now. Sunitha is a fighter and she has been struggling to save her son’s life every single day.
On one of those fateful mornings, Sunitha holds her son’s frail little hands as he battles with infections and on and off fever. As he cries in pain, Sunitha tries to calm him down while trying to deal with her own emotions. Suraj was only one-month-old when it all started.

It Has Been a Never-Ending Battle

Sunitha, 37, works at Accenture. Her husband ,Balaji, 41, is an employee at Indelox. They were happy. When Suraj came into their lives, they believed their family was complete. But, the happiness didn’t last long.
Hardly had even a month passed, when Suraj started getting recurrent infections. It was later diagnosed that Suraj was suffering from severe congenital neutropenia, a condition where people have a shortage of neutrophils, a type of white blood cell that plays a role in inflammation and in fighting infection.
His condition started deteriorating further since last September. Suraj started growing weaker and succumbing to the pain which was spreading through his body. The abdominal infection led to a condition called liver abscess, wherein his liver was filled with a pocket of pus. He had to undergo three surgeries in order to get that treated.
At present, he is undergoing a treatment to stimulate neutrophil production, and is being supported by growth factor and other medicines to prevent infection.

“We have exhausted all our savings but, unfortunately, that’s not enough,” says Sunitha. “We then decided to use the alternative of raising funds through Facebook and approached our friends and relatives. That helped us raise Rs 7 lakhs,” she adds. Sunitha and her husband have already spent about Rs 25 lakhs on Suraj’s treatment in the past three years.
“No one comes to our home to visit us anymore other than my in-laws. They are scared he might catch infection. We don’t have friends, don’t go for outings, don’t have a life. But, that doesn’t matter. We don’t want to lose Suraj. He is our only hope,” she says.
Suraj’s only chance of beating the disease is to have a bone marrow transplant. His father will likely be the donor. The treatment would cost about Rs 25 – 35 lakhs.
“My colleagues at office have also been very supportive and my company has been very generous. But, I kept taking leaves to take care of Suraj. For how long could this work? I had to make a choice – my project or my son. And I chose my son,” says Sunitha.

This mother is fighting with all her might to give her son the life-saving bone marrow transplant, which will take place in Narayana Health Hospital, Bengaluru. You can help Sunitha save her son's life. Donate here. 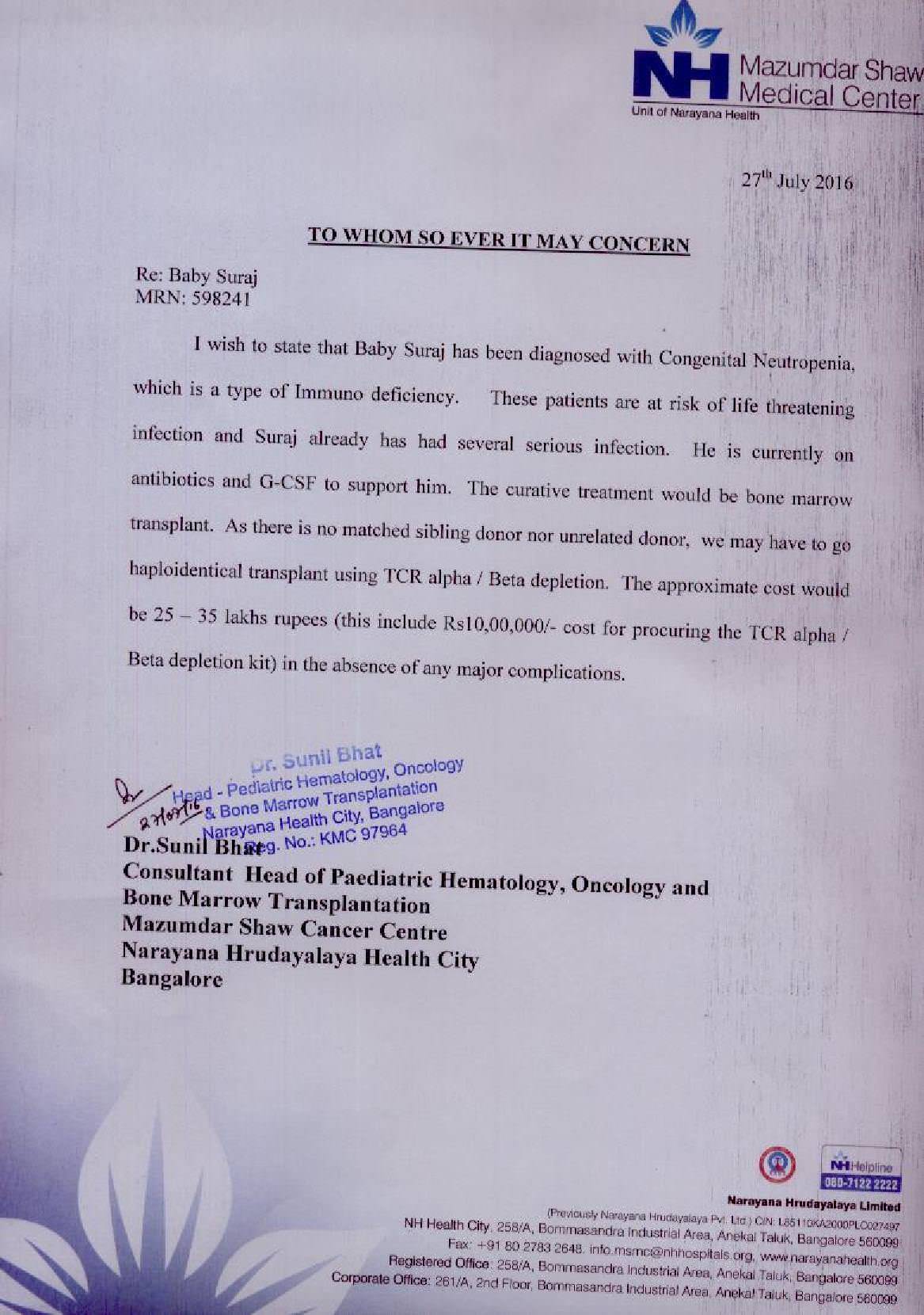