Poor Parents Who Did Not Know That their 4-year-old's Heart Was Failing Are Now Struggling To Save Him | Milaap
loans added to your basket
Total : 0
Pay Now

“My son is getting weaker every day. He can’t even walk for a few minutes without stopping to catch his breath. I just got to know that he has a severe heart disease only a few months back. He’s already 4 years old, and if he goes on like this he won’t be able to live for long.” – Nabi, Zohair's father

After feeling Zohair’s heart beat abnormally fast, Nabi and his wife, Afsa were in tears when they found out that their 4-year-old was suffering from a severe heart defect known as atrial septal defect, which is a hole in the upper half of the heart.  Right now, the 4-year-old’s heart is at high risk of failure. Due to the hole, his body doesn’t receive enough oxygen causing him to breathe rapidly.

“Wherever we go, in just 2-3 minutes he says, ‘Papa, pick me up, I can’t walk anymore and I can’t breathe’. If he walks, he will just sit down in 4 or 5 minutes. He struggles to breathe and it feels like he gets suffocated. He can’t even eat food properly and nowadays he doesn’t feel like eating too. He’s become so weak. He was such a nice and chubby child but now I can see and feel his bones too. It just breaks my heart.” – Nabi

Having survived all these years, now, the 4-year-old cannot survive without a corrective heart surgery which he needs within a few weeks. The disease has taken a serious toll on Zohair’s mental health too.

“He’d play with every kid in the neighborhood. Now, unable to eat what he loves or play for long he gets angry, sad and frustrated all the time. He keeps shouting and gets occasional fevers too. Afsa is crying every night and she doesn’t even sleep properly. Our financial condition is very bad and we both don’t want to lose our son to poverty.” – Nabi

With only a few weeks left to welcome second child, Nabi is running out of money and hope to save Zohair

In a few weeks, Zohair's mother Afsa will give birth to the couple's second child, which will also be a massive financial burden for them. Nabi is so torn apart because he’s running out of time to save his son.

“3 months ago, Afsa was so critical in the hospital. She was suffering from a raging fever that left her so weak that she couldn’t even stand up or move. She was 5 months pregnant too and I was so frightened. She remained in the hospital for a week which cost around Rs. 80,000. Now, I’m afraid about Zohair every single minute. I don’t even have Rs. 10,000 in my bank right now. How can I afford such a surgery and save him?” – Nabi

Zohair’s heart is dying slowly and only a corrective heart surgery can save him now. His father, Nabi, who works for a meagre salary in a private company, has absolutely nothing left and his family is as poor as him, if not worse. He’s racing against time to provide Rs. 3.9 lakhs and he, simply, cannot do this without your help.

Your support will save 4-year-old Zohair and ensure that he goes to school one day and have a normal childhood. 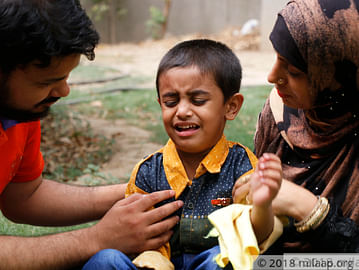 4-Year-Old Zohair Can't Even Walk Without Struggling To Breathe

Zohair's heart is dying slowly and he won't survive long without a surgery.

UPI: rzpy.givetomlpzohairha001@hdfcbank (Copy to clipboard)
Or
Click here to read the instructions before you make a bank transfer.