Brutal Murder Of Her Husband Left This Mother Alone In The Fight To Save Their 5-Year-Old Son’s Life | Milaap
loans added to your basket
Total : 0
Pay Now

“Even smiling causes him severe pain, and a small cut can be fatal. He's only getting worse as the days go by. If my husband was alive, we would’ve somehow managed to get him treated. I have noone to turn to now."

5-year-old Yashwanth can no longer play without risking his life. His mother, Shobha, keeps a close eye on him at all times. Yashwanth’s disorder causes him to bruise easily, and worse, bleed uncontrollably if he gets even a small cut. The past one year has not only been a physical battle for him, but also an emotional one as he struggles to move past the void of his father’s absence. Yashwanth's condition is now rapidly deteriorating, and only urgent treatment can save his life.

Yashwanth wants to get better, but his pain is only increasing every day

Yashwanth has a serious disorder called chronic immune-mediated thrombocytopenia a condition in which the immune system destroys the cells producing the platelets in the bone marrow causing extremely low blood platelet count. This causes excessive bruising and bleeding. Yashwanth has been on strong medication ever since his diagnosis a year ago, but with no improvement.


“He’s 32 kgs now. The medicines haven’t improved his condition and caused many side effects. His weight is only increasing, and his body is swollen in pain. His nose bleeds uncontrollably every now and then. But he never complains about all the hospital visits and tests. He just wants to get better.”

Yashwanth now needs a surgery to remove his spleen to keep more platelets circulating. He also needs injections every 3 months to keep him going. This is his only chance.

“6 months ago, my husband’s body was found in Krishnagiri, with his head severed. He had gone there because someone he knew promised to give him money for our son’s treatment. I remember trying to reach him all night. Krishna worked very hard as a taxi driver. He took care of everything for us. Yashwanth keeps asking about him, and I don't know what to say sometimes. If I lose Yashwanth now, I’ll lose another part of me.”

Yashwanth risks bleeding out, and Shobha can't save him on a meager income

Though devastated, Shobha has been single-handedly taking care of her children ever since her husband’s murder. She accompanies children in a school van and earns Rs. 7500 per month for it. Every month, she spends around 5000 on Yashwanth’s checkup and the rest for her daughter's education. Shobha has no savings left anymore. The injections are the only thing that can keep Yashwanth alive and out of danger, but Shobha is struggling to save him.

Yashwanth needs a surgery to remove his spleen and an injection every 3 months to survive. Medicines aren’t enough to keep him alive any longer as his disorder is only making him worse. Shobha earns a meager amount and has used all her savings on his treatment so far, she can’t afford the 6 lakhs needed. Yashwanth risks bleeding out completely without treatment.

Only you can help Yashwanth get the treatment he needs to stay alive. 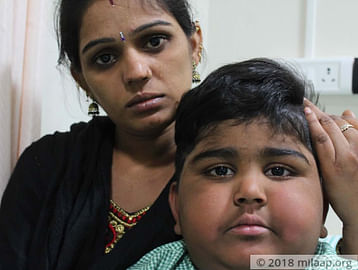 Only surgery and continued treatment can save Yashwanth's life now.