“He turns 5 in four days, but there will be no celebrations this year. He was just a month old when he had his first major surgery. Ever since then, every birthday of his has been a blessing.This year Vihaan will spend his birthday in the hospital, and without treatment, he might not make till his next one.”

One month ago, Vihaan excitedly said that he wanted cake and chocolates for his fifth birthday. This was just a few days before he fell extremely sick. Vihaan’s fever refused to subside. He had severe stomach pain and constipation, his skin and eyes were turning yellower by the day and his stomach was swelling up. Ajay and Pratibha’s worst fears were realized – their son’s life is at risk once again because of a serious liver condition, and this time, a liver transplant is the only way he will survive.

Vihaan was born a healthy baby, but a few days after his birth, his parents noticed that his poop was unusually white, and he would cry uncontrollably due to discomfort. His worried parents soon learnt that their baby had Biliary Artesia, a rare disease of the liver and bile duct where the bile gets trapped in the liver.


“He needed a surgery immediately to remove the blockage in the bile duct. He was just 45 days then, and we were so terrified that my wife held him in her arms till the very last second that they took him into the operation theatre. He was so small, we didn’t know if he was going to make it. When the surgery was a success, our happiness knew no bounds. For 4 years after that, he had a healthy and normal childhood. We thought the worst was behind us.”

Unfortunately, little Vihaan now has Biliary Cirrhosis, a condition that causes progressive damage to the liver and worsens it considerably over time causing end-stage liver disease. If left untreated, Vihaan’s liver will be completely damaged, and there will be no coming back.

Vihaan’s condition is getting worse each minute, the transplant can’t be delayed any longer

“It seems like just yesterday that he was running around with his cricket bat and shouting ‘howwzaaat’ at home. His energy seemed limitless. We thought all the suffering he went through when he was a baby was the only pain he would experience. Now he can barely walk two steps without being in pain. He takes a few bites of food and says he can’t eat anymore. He mostly just lies down and cries in pain. I can see the yellowness on his face and eyes increase every day. I can see him slipping away.”

Father has exhausted all his savings yet couldn't afford the treatment

Ajay, an engineer working for Reliance Communications, has done all he can to try and save his son. Even after using the medical insurance from the company, Ajay just doesn’t have enough to afford the liver transplant that will save Vihaan’s life. He has somehow managed to continue years of treatment and medication using his savings, but now, even that’s depleting.

Vihaan needs a liver transplant before his condition deteriorates beyond repair. If it gets any worse, even a transplant can’t save him. His mother is a matched donor and can only save her son if they somehow find a way to afford the surgery. Vihaan can make it with timely treatment, and only you can help save him before it’s too late.

Your support will save Vihaan’s life. 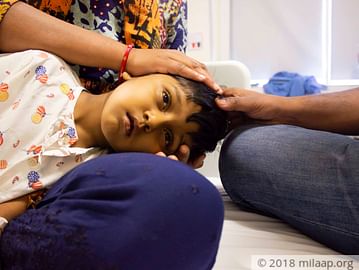 Vihaan Is Getting Sicker Every Minute, The Transplant Can't Be Delayed Any Longer

Vihaan needs a liver transplant before his condition deteriorates beyond repair.

UPI: rzpy.givetomlpvihaanba001@hdfcbank (Copy to clipboard)
Or
Click here to read the instructions before you make a bank transfer.