This Nurse Is Struggling To Save Her 13-Year-Old Daughter From Aggressive Cancer | Milaap
loans added to your basket
Total : 0
Pay Now

“I’ve worked as a nurse for 25 years in the ICU. I’ve seen and cared for so many people with different illnesses. I’ve seen families staying in the hospital for weeks, constantly worried for their loved ones. I never imagined that one day, we would be among those families and our daughter would be fighting death. Ever since Varshini was diagnosed with blood cancer, our life has come to a standstill. On some days, her joints hurt so much, that she can barely move and I have to carry her to the bathroom. Cancer has weakened her body and spirit. As a mother and a nurse, I’m the most helpless now than I have ever been.” – Kavitha, Varshini’s mother

Often before going to school, Varshini (13) would stand in front of her mirror and pretend to be a TV anchor. Her tales were never-ending, and there was always a joyous laughter in the house when she was around. But now, Varshini is too weak to even stand. She barely eats or talks and wakes up every morning in unbearable pain. Varshini has a fast-growing cancer of the blood and bone marrow, and only chemotherapy can save her life.

A few months ago, Varshini had a mild fever. Kavitha and Simon thought it would subside with medications. However, it only got worse and she was soon feeling dizzy and weak. Kavitha and Simon took her to a local doctor who told them that it was only a viral, and they had nothing to worry about.


“Our daughter was only getting weaker by the day. Her joints started hurting so much, she could barely stand up without crying in pain. She kept asking me what was happening to her, but none of us knew. It was weeks later that we found out she has blood cancer. The first thing I thought about is what I’m going to tell Varshini. It hurts that I have to lie to her, but I also can't tell her what 'cancer' means. I’ve spent last few days telling her that she will be out of the hospital in no time, but I know that’s not true.”

Varshini needs chemotherapy for the next 9 months to fight cancer. She’s too young to understand the implications of cancer, and while she doesn’t know she’s fighting a life-threatening disease, she knows that her pain is not from a simple fever.

With shattered dreams and an uncertain future because of cancer, Varshini needs urgent treatment to live

Kavitha hasn’t gone for work in months because of Varshini’s cancer. Simon works at a textile company and earns 10,000 per month, but after spending nearly 3.5 lakhs on her treatment so far, he’s left with little to continue his daughter’s life-saving treatment.


“Varshini wants to be a TV anchor when she grows up. Last year, she wanted to go to a competition and we couldn’t afford the registration fee for it, but Varshini never complained. She always spoke about getting a job when she's older and all the things she would do. Now, she might not even have a future. I never thought that our financial condition would one day stand in the way of our daughter's life. I don’t think any parent is prepared for this. We've tried our best to start her treatment, but continuing it is beyond our means."

Varshini needs chemotherapy to beat deadly cancer that will grow and spread rapidly without treatment. Kavitha and Simon have tried to do all they can to save Varshini, but now, they’re falling severely short. Varshini longs to go back to the warmth of her home and wake up every day with the energy she had before. She can get better with treatment, but she needs your help to beat cancer for good.

Your support will save Varshini’s life. 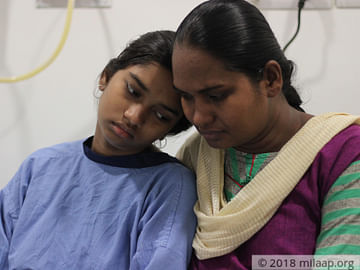 Varshini needs chemotherapy to beat cancer, but her parents are struggling to save her.

UPI: rzpy.givetomlpvarshini002@hdfcbank (Copy to clipboard)
Or
Click here to read the instructions before you make a bank transfer.