10-month-old With Wires All Over His Body Needs ICU To Survive | Milaap
loans added to your basket
Total : 0
Pay Now

DP
You are sending a message to
Dinkar Pasalkar
Go back

Shares
Shares
Share on whatsapp
In 2 weeks, 10-month-old Tejas has gone through two surgeries. He often cries in pain all night long. Nothing can calm him. The waiting hall outside the ICU is now like home to his parents, Ganesh and Usha. They have been sitting there for that past 15 days hoping to hear positive news that Tejas can be taken off the ventilator. Unfortunately, he needs to be on it for at least 20 days to completely recover.

Tejas was having trouble in breathing last month. His problems aggravated and he fell unconscious in the middle of the night. Distraught, the parents rushed him to a hospital at midnight where they discovered he has respiratory distress because of a condition called laryngomalacia. The tissues in his voice box began blocking his airway because of a congenital defect.

“His cries kept echoing around us. I felt helpless. He needed not one but two surgeries. He still needs help to breathe. Watching him with just a diaper on and so many wires hooked, breaks me. My son looks smaller than ever and he looks so weak.” - Ganesh

We are already in debt, nobody is ready to lend us more money, even to save him

Together, we can help baby Tejas 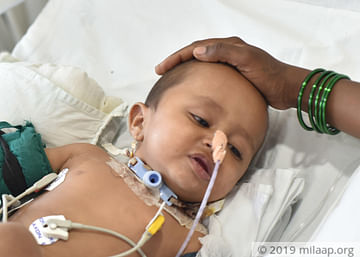 Wearing Nothing But A Diaper And Wires, This Baby Fights To Recover