10th Grader With Heart Disease Cannot Go Back To School Because Her Disease Affected Her Memory | Milaap
loans added to your basket
Total : 0
Pay Now

"Subhu is 18 now but has the heart of a 10-year-old. She is very slow due to her heart problem. She couldn't even continue her studies after 10th grade because of her poor memory and weakness. Two months back, she became very frail and fainted frequently. Now, she throws up everything. Her heart disease has become worse and doctors say only an urgent surgery can help her live a normal life." - Swaminathan, Father of Subhulakshmi.

Swaminathan and Sumathi named their daughter 'Subhulakshmi' meaning 'Heavenly Wealth' because she was born after 8 long years of their marriage and they ahve always considered her to be their greatest asset. This happy family was shattered completely when Subhu was diagnosed with a heart disease when she turned 8. She has a hole in her heart that separates the two upper chambers of the heart. This allows oxygen-rich blood to leak into the oxygen poor chambers in the heart and the lower chambers of heart and valves are not properly formed.


"We gave her proper care, we made sure she always had healthy food. We were worried when she didn't learn to speak even after 5 years, but we believed that she would pick up words soon. She started to talk slowly. When she lost weight, we knew something is serious but we never thought it would be a heart disease. From the day of diagnosis we never let her play. Even walking a few steps would make her struggle to breathe. We were told medicines would cure her, but nothing helped." - Sumathi.

Subhu had an urgent heart surgery within few weeks of her diagnosis and years later, her condition became worse again

Subbhu has been taking medicines from the day of her diagnosis. One day, while she was at home, she complained of severe chest pain and she was rushed to the hospital. Doctors told that an urgent surgery has to be done to save her life.  Her symptoms were in control after the surgery and she started to go to school regularly.

"We thought with that surgery all our pain and trauma had come to an end. We were happy to see her going to school like other children. But her teachers often complained about her poor memory and her concentration. We thought she'll slowly pick it up. Her two younger brothers are very smart at their studies but we never compared her to anyone. We never let her feel worthless even when she discontinued her studies. We couldn't bear when the dreadful symptoms started again suddenly.  But now I feel I'm failing her, all her suffering is due to her heart disease. Doctors have given us a solution but we can't afford that. " - Sumathi.

Father has not yet paid the money he borrowed for Subhu's first surgery, now he is left helpless

Swaminathan works as a daily wage labour in a farm in his village near Chidambaram district. He earns Rs 300 per day. With this meager income, he manages to feed his family of five and also buys medicines for Subhu. He borrowed heavily for Subhu's first surgery and he hasn't paid back. Now he cannot afford the surgery.


"We took her to a hospital in Chennai when her condition became worse. Every time we take her up for tests, it would costs us Rs 2000 for the bus tickets and food. I borrow money even for travelling to Chennai. Doctors have told that she needs an urgent surgery. I can see my daughter getting weaker day by day. But there is no way that I can arrange for 4 lakhs. I have not even seen that much money in my life. Who will give such a big amount to a poor man like me? But I cannot give up on her. She is our world. " - Swaminathan.

18-year-old Subhulakshmi has multiple heart defects and also suffers from developmental problems. She needs an urgent open heart surgery to recover completely and live a normal life. Her poor parents have spent everything they had for treatment and now they can't even afford the bus tickets to the hospital. They are desperately waiting for a help. 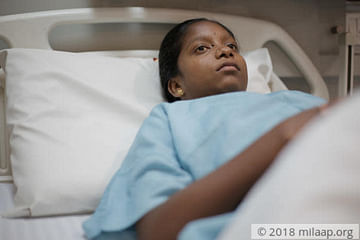 Her parents are struggling to save her. They cannot afford the surgery.

UPI: rzpy.givetomlpsubhulak001@hdfcbank (Copy to clipboard)
Or
Click here to read the instructions before you make a bank transfer.