This Boy Will Lose His 5 Year Battle With Cancer If He Does Not Get Urgent Help | Milaap
loans added to your basket
Total : 0
Pay Now

NC
You are sending a message to
NIZAR C.S
Go back

“We were relieved and happy when the doctors declared him cancer-free 3 years ago. He even started going to school shortly, and was growing up to be an energetic and cheerful young boy. He was so enthusiastic about drawing and singing in the church choir. Right when he was about to get promoted to 1st grade, we learnt that his cancer had relapsed. We were shocked and wondered why our innocent child had to go through suffering all over again,”-Shibu, father of 7-year-old Shenz.

Despite undergoing a bone marrow transplant, this little boy's life is not out of danger

At 2 years of age, Shenz was active and playful. He had already started saying words like Acha (father) and Amma (mother), and was attempting to speak in full sentences. But his mother soon noticed that he would point to his knee and cry every time he ran or walked fast. Doctors first dismissed it as normal growth pains but as it persisted, he was diagnosed with blood cancer. He got chemotherapy, after which he was declared cancer-free. After living a normal life for 2 years, his cancer came back recently - deadlier than ever. Chemotherapy alone could not help him and he had to undergo a bone marrow transplant for it recently. But even after it, his life is in danger.


“Last night, he started crying saying he couldn’t breathe. Doctors tried giving him an oxygen mask, but he lost consciousness suddenly. He had to be rushed to the ventilator. Doctors suspect that he may have kidney damage due to a viral infection,”-Shibu

‘When will my fever leave me alone? I want to go back home’

Shuja and Shibu have told Shenz that he is in the hospital again due to fever. He believed them, and even cooperated well with nurses and doctors whenever they gave him injections or medicines. But of late, the child had become restless. He keeps asking his parents when he can go home and meet his siblings – Shelix (13) and Hepzhiba (5) who are staying with their grandparents in their hometown of Mavelikkara in Kerala.


“He would keep asking us –‘Why is my fever not going away? Why do I look so different?’ all the time. We also kept giving him excuses, but he never seemed convinced. He used to like drawing in the hospital when he was bored, but of late he stopped hat too,”-Shibu

This father was forced to quit his job to care for his son, now has no money to save him

Shibu used to work as a driver in Dubai, and toiled tirelessly to make sure his family had a comfortable life back home. But he quit his job 2 months ago and came back to India after learning that Shenz’s condition had become worse. He gave up all his savings and sold his wife’s jewellery to afford the expensive transplant that Shenz urgently needed. But now, his little boy’s life is in danger again and he has run out of funds and is in no position to continue treatment.

“My child has suffered so much in these 5 years. He needs ICU support and expensive medicines but I don’t have anything left with me now to afford it. Please help me,”-Shibu

With your kind contribution, these desolate parents will be able to save their little boy 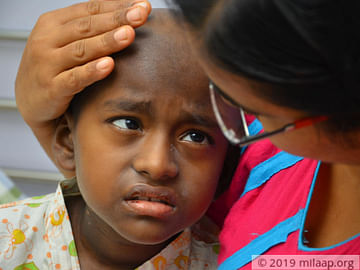 Even after a transplant, he is critical and needs urgent help