Despite Battling Cancer, This 10th Grade Boy Is Determined To Write His Exams But Parents Cannot Afford His Treatment | Milaap
loans added to your basket
Total : 0
Pay Now

Despite Battling Cancer, This 10th Grade Boy Is Determined To Write His Exams But Parents Cannot Afford His Treatment

Shares
Shares
Share on whatsapp
Even as he was vomiting, shivering and extremely tired from the treatment, Arokiya was preparing for his 10th board exams but he couldn't write owing to his condition. This has not shattered him, instead he is even more determined to write supplementary exams in this August. He thinks he will get better and continues to prepare hard for his exams. He does not know that his parents cannot afford his treatment anymore.


'We did not even notice it until he woke us up in the middle of the night'
Last September, Daison came back from school with a few lumps on his legs. Overnight he began writhing in pain. He woke his parents who took him to a doctor in Tirupur. Pain medicines did not help him. He became so tired that he stopped eating. At a hospital in Coimbatore, weeks later, Daison was diagnosed with cancer in his bone marrow. Without chemotherapy, it would spread to the rest of his body.

"At first, I didn’t want to tell him. I didn’t want him worrying about that, he is only 14 years old. My husband Sebastin explained it to him and assured him that the hospital will make him all better. Except for the dark days like today, he is incredibly positive and comforts us when we are worried.” - Mary

Daison is keeping up with school despite the pain

Daison has gone through 3 cycles of chemotherapy. He still needs 4 more. He looks forward to writing his exams in March. On the good days, he calls his friends and teachers to catch up on the lessons.

“The nurses, ward boys and everyone are astonished at his drive. They say his will power itself can conquer cancer. We know the truth. It is will, medicine and money.” - Sebastin

Sebastin is a machine operator in a small company. After Daison’s diagnosis, he has been working extra overs to afford the medicines. Mary stays with her son in the hospital while Sebastin visits over the weekends. He managed expenses by exhausting his savings and taking loans from friends.

“Even we were positive for a while. Now, I’m afraid I have to tell Daison that we cannot afford his treatment. The worst part is knowing that he can be cured and still not able to afford it. I need Rs. 7 lakhs to continue the treatment. My son trusts us and I cannot fail him.” - Sebastin

Daison’s hope lies in crowdfunding. He can defeat cancer and top his exams like he wanted to, with your help. 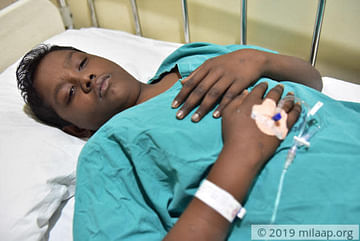 He is unaware that his parents are struggling to afford his medicines. Help him survive.