After Exhausting All Her Savings, This Mother Can’t Save Her 11-Year-Old From Cancer On Her Own | Milaap
loans added to your basket
Total : 0
Pay Now

After Exhausting All Her Savings, This Mother Can’t Save Her 11-Year-Old From Cancer On Her Own

Shares
Shares
Share on whatsapp
“Aunty, where is Ranjit?” the 11-year-old’s friend asked looking around the house. Shobha was shocked. Ranjit was sitting right beside him. His friend, however, couldn’t recognize him because of how much cancer had changed him. Ranjit’s hair is almost all gone, he has become weak, his face is swollen, eyes sunk in and he can barely open his mouth to talk. But up until then, Ranjit was not scared of the “blood infection” he has.

With your support, Ranjit can fight cancer and go back to the life he once knew. 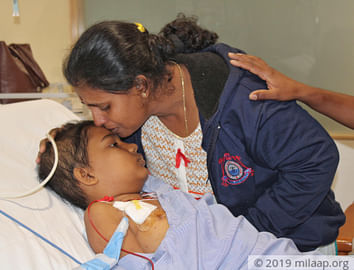 Ranjit, Once An Active Kid, Is Now Bedridden Because Of Cancer - He Needs Your Help

Ranjit needs chemotherapy to fight cancer, but his parents can't afford the treatment.