This 5-Year-Old’s Legs And Joints Are So Painfully Swollen That She May Not Walk Again Without Urgent Help | Milaap
loans added to your basket
Total : 0
Pay Now

Shares
Shares
Share on whatsapp
Priya had been waiting to spring up from bed and run to wake up her mother that day. But instead of her usual energy, she felt a piercing pain numb her joints and limbs. She could not move; the pain just kept getting worse. Today, Priya cannot walk two steps without wincing in pain because her legs are so swollen. She needs treatment urgently or she may not walk again, let alone go to school and go back to being the smart and energetic little girl she once was.

5-year-old Priya was a normal child with no significant health issues until about a year ago. But all of a sudden, she came down with high fever and a sharp pain in her legs. Her parents, Sishudev and Nila, took her to the hospital immediately.

“The doctors gave her medicines and painkillers for 5 days. But she did not get better. Our daughter’s cries only intensified. We didn’t know what we could do to save her from her pain – we had never felt so helpless in life before.”-Nila, mother.

When Priya became almost crippled, her parents had no choice but to take her to a hospital in Kolkata from their hometown in Hoogly

“Nothing that the doctors in the local medical centre in our town did could help our child. She had stopped eating completely due to the pain; all she could do was cry out in pain- but after a point she was too tired to even do that. She had forgotten how to walk because her joints were so swollen and had basically crippled her. She couldn’t stand. That is when we begged and borrowed, and rushed her to a good hospital in Kolkata.”-Sishudev, father.

This little fighter was diagnosed with a rare form of arthritis, which will make her handicapped for life without urgent treatment

After a few days of treatment at the hospital in Kolkata, Priya’s pain decreased and her swelling had also gone down. Her fever had also more or less subsided. But she still could not walk. Her parents encourage her to walk, but she runs to them asking to carry her. Priya has juvenile arthritis, which affects the limbs and joints of kids, causing unbearable pain. She still gets intermittent pain and swelling.

“The doctors are telling us that she will not be able to walk again if she does not get special injections that are costly. That is the only way she can go back to school – I want my child to grow up normally and even get educated well – but how will she able to do that if she cannot even walk a step? We are heartbroken seeing our child live in so much pain.”-Nila.

Sishudev and Nila earn about Rs 7,000 a month, but they have to spend Rs 2,000 only on Priya’s medicines alone. They have already spent around Rs 1 lakh on her treatment so far by borrowing from friends and relatives. Now, they are left with no option but to sell the piece of land that they farm on.

“We don’t have enough money to continue buying painkillers to ease our daughter’s pain, how will we afford such an expensive surgery? For the past 1 year, we have been borrowing money from each and everyone we know. Priya’s elder sister 8-year-old Riya had the same problem and even developed a tumour – we had already spent a lot to get her treated. I need help to save my child.”-Sishudev.

Priya is in such a situation that most 5-year-olds cannot imagine being in. At a point in life where her life should only revolve around her friends and school, she is screaming in pain every day. An injection worth Rs 2 lakh can help save her from this living hell. Her poor parents have exhausted everything they had – they need help to save her. 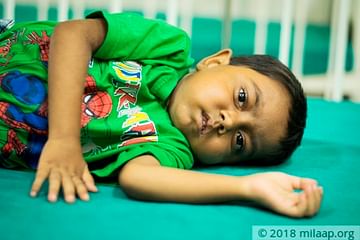