2-Year-Old Has Only 24 Hours Left To Get A Heart Surgery That Will Save His Life | Milaap
loans added to your basket
Total : 0
Pay Now

You are sending a message to
Ankita Bengani
Go back

“His lips, tongue and nails have turned completely blue. He has spent months in pain because of his heart disease, and it’s only getting worse with time. He cries for hours together on some days, and there’s nothing we can do to comfort him. The only thing that can save him is a heart surgery. This is the most helpless I have ever been. My son has 24 hours left to get a surgery that will save his life, and the only thing standing in his way is our poverty.” – Trilokaram, baby Prahlad’s father.

Each day that Prahlad goes without surgery, he’s being pushed closer to his parents’ worst nightmare – losing him forever. Prahlad’s heart disorder is only making him weaker by the day, and without surgery tomorrow, he won’t make it. Trilokaram is devastated. He spends all day trying to find a way to afford his son’s surgery, but he’s running out of time to save Prahlad.

Prahlad has Tetralogy of Fallot, a heart disease that is a combination of four heart defects. This causes oxygen-poor blood to flow out of the heart and the rest of the body, making the little one extremely weak and breathless. Even crying exhausts him, and soon, his loud cries turn into a painful struggle to breathe. Every time this happens, Trilokaram and his wife think they’re going to lose him.


“It all began when he fell sick six months ago. We thought his fever would subside with medication, but nothing helped. Soon, he started getting breathless. That’s when we knew that something was gravely wrong with our baby. Earlier, he would run around the house with his sisters, all of them laughing and playing together. Now, he gets tired after a few steps. He then starts breathing heavily and his heart beats so fast. It’s terrifying.”

A year ago, when Prahlad took his first steps, his parents knew that there was no stopping him. He was active, healthy and always had a smile on his face. He kept his parents on his toes, and their small home was filled with happiness. Now, Trilokaram and Anopi have to carry him everywhere. Watching their once cheerful son suffer so much has left them heartbroken. But there’s hope for little Prahlad.


“He can be saved with a surgery, but he needs it tomorrow. I’m only a daily wage worker, and earn around 300 a day if there’s work. I don’t have any savings and I don’t have enough time to arrange the 1.8 lakhs needed for his treatment.”

Little Prahlad has 24 hours to get a life-saving heart surgery, but his parents have nothing to save him. His father, a daily wage labourer, can’t afford the surgery on his meagre income and desperately needs your help. Prahlad has his whole life ahead of him, but the heart disease will tragically cut short his life without urgent surgery. Prahlad can make it with your help.

Your support will save Prahlad’s life. 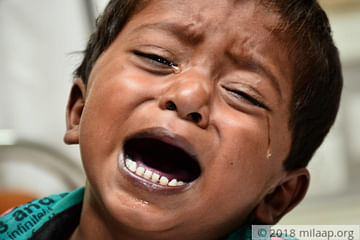 He Needs Surgery Tomorrow To Survive His Failing Heart

Prahlad needs an urgent heart surgery to live, but his parents are struggling to save him.

UPI: givetotrilokaram@yesbankltd (Copy to clipboard)
Or
Click here to read the instructions before you make a bank transfer.