2-Year-Old Cries Helplessly And Itches Till He Bleeds, He Has Just Few Weeks Left To Get A Transplant | Milaap
loans added to your basket
Total : 0
Pay Now

2-Year-Old Cries Helplessly And Itches Till He Bleeds, He Has Just Few Weeks Left To Get A Transplant

“Even the mere sight of a hospital terrifies him, and I have to take him in as he screams and cries. I can’t leave him alone for even a second. The only word he can say is ‘mummy’ and he repeats it over and over again every time he cries. Even though he can’t talk, I know he’s begging me to take away the pain, away from the injections, but I’m helpless. Ever since he was 6-months-old, he’s been in constant pain. His disease is only making him weaker by the day, and nothing I do can save him. An urgent bone marrow transplant is his only chance to survive.” – Kaveri, baby Prabhas’ mother

Baby Prabhas’ body is giving up on him. He’s so vulnerable to infections that even a mere cold can be deadly. Without an urgent bone marrow transplant, Basavaraj and Kaveri will lose their youngest child.

Since birth, all little Prabhas has known is excruciating pain and discomfort

Baby Prabhas has been diagnosed with Wiskott Aldrich Syndrome, an immunological deficiency that reduces the ability of the body to form blood clots, causes easy bruising and bleeding due to the decreased number of platelets and makes the body highly vulnerable to life-threatening infections. Prabhas also has rashes all over his body and itches himself uncontrollably.


“When he was 6-months-old, he had red spots all over his body. He would cry all night, and he would constantly have a cough and cold. It was when he turned 1 that we found out about his disease. I had never heard of something like this before, but we could see that it was only getting worse with time. There hasn’t been a day where he’s not been sick. Sometimes he has rashes and boils all over his body, and he scratches himself so much that it starts bleeding. It’s heartbreaking to watch him helplessly roll on the bed when his whole-body itches.”

His parents are running out of time to save their baby

Kaveri can remember only a few days where Prabhas wasn’t sick. On those days, he would happily run around the house with his older brothers. When they were exhausted from all the playing, they would all sit down, dipping their biscuits in milk. Now Prabhas spends his days lying in bed, too weak to move. The only way is for him to get a bone marrow transplant in less than two months.

“For the past few months, he’s only been in and out of the hospital for tests and injections. His brothers miss him terribly and keep asking us what is wrong with him. How do I tell them that we just have a few weeks left to save Prabhas?”

As Basavaraj bids goodbye to Prabhas every morning before work, he wonders what the evening will bring for his baby. Prabhas’ condition can deteriorate at any moment.

“Even when I’m working, all I think about is our son. Earlier, I used to wait to go back home. My sons used to come running to me when I reached, all climbing on top of me, waiting to be carried. But now, I’m afraid to go home and hear that the worst has happened to our child. Every time my phone rings, I think it’s from the hospital and I panic.” - Basavaraj

Basavaraj is a daily wager who works on a construction site for a few hundreds on a good day. Kaveri, who once used to work as a labourer, stopped working when Prabhas fell ill. After borrowing heavily from neighbours and relatives to start Prabhas’ treatment, the helpless parents are now neck deep in debts. Their meagre income isn’t enough to afford the bone marrow transplant, and they’re desperate for support to save their baby.

Baby Prabhas needs a bone marrow transplant in less than two months to survive the rare and severe disease he’s been living with. Prabhas’ cries are heard throughout the hospital ward every time his parents take him, and it’s hours before he’s consoled. Prabhas has spent the last one year in severe pain and only a bone marrow transplant can free him from this misery. The little one can have a happy and normal childhood, but his parents are struggling to afford his treatment. Baby Prabhas can make it with your help.

Your support will save Prabhas’ life. 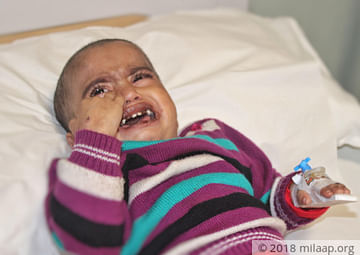 With Only A Few Weeks Left To Get A Transplant, His Helpless Parents Are Struggling To Save Him

Prabhas needs an urgent bone marrow transplant to survive. You can help save his life.