Parents Force Feed Their Baby Every 3 Hours To Keep Him Alive Until They Can Afford His Liver Transplant | Milaap
loans added to your basket
Total : 0
Pay Now

Shares
Shares
Share on whatsapp
If 1-year-old Nihal skips his routine dose of cornstarch with his food every third hour, he would lose his life. Every three hours, if he stops eating, his blood sugar will fall rapidly leading to seizures or even a fatal brain damage. He needs to eat just the right amount - not less, not more. He has never had a full night's sleep in this 2 months due to a rare disease that is damaging his liver. This little boy can escape this pain and live a normal life with a liver transplant but his parents cannot afford it. 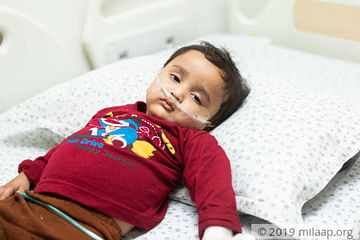 His Low Blood Sugar Can Turn Fatal Any Moment

His parents cannot afford the surgery and they need your help to save him.