This 11-Year-Old Can Walk Again Only If He Is Cured Of Cancer, Help His Parents Save Him | Milaap
loans added to your basket
Total : 0
Pay Now

This 11-Year-Old Can Walk Again Only If He Is Cured Of Cancer, Help His Parents Save Him

“Everytime I see Nehal lying on the hospital bed, writhing in pain, unable to walk even a few steps on his own, tears roll down my eyes. I can’t believe that he is the same boy who would always stay outside of home, running around, till as long as it was possible. In just a few months, my son’s life has changed for the worse. Now we are running from pillar to post trying to afford the chemotherapy that will cure Nehal,” - Rupa, mother.

“Maa I took so many medicines - why isn’t my pain going away?”

11-year-old Nehal was diagnosed with a group of highly cancerous tumors in his left hip area in early November. He had been complaining of a stinging pain but since there were no other symptoms, his parents thought that this was a mere bruise from the football game. But to their horror, they were proved wrong. Medicines were of no respite to Nehal any longer.

“After coming from school, he used to drop his bag and go out and play with his friends. He used to take his little brother, Krishna, along with him. I remember getting angry with him then - only if I knew that soon my son wouldn’t even be able to walk.”

Nehal with his brother, Krishna

With just a few hundreds in their pocket, Rupa and Pukul don’t know how to continue the treatment

Nehal’s parents didn’t waste a single moment after they got to know that their son had cancer. Gathering all their savings, they took the train from West Bengal to come to Bangalore. His chemotherapy has started in Vydehi and the doctors have assured that with continued treatment, he will get better.


“We have borrowed from our relatives back in the village and have somehow managed to get Rs 1 lakh. With that we have started his chemotherapy but we need about Rs 5 lakhs more.If I don’t get any help, we will never make it.”

With your help, Nehal can get back on his feet and return to his normal life

Nehal is aware that he has cancer but he is hopeful that he will be cured soon. The chemotherapy has made him weak and sometimes he gets very cranky. He misses his little brother and wants to go back home. But his daily wager parents are unable to continue his treatment. You can come forward and extend a helping hand to the parents.

Your support can cure Nehal of cancer 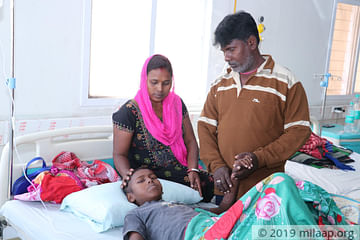 Tumor in his left hip doesn't allow Nehal to walk, he needs treatment