You are sending a message to
Saarthi MDI Gurgaon
Go back

Shares
Shares
Share on whatsapp
If you ever happen to be around Ardee City in sector 52 of Gurgaon, finding Nai Kiran School wouldn't be a challenge. The large group of tents with a gathering of more than 400 kids will always draw your attention.

J.D. Khurana is a 70-year-old Retired Engineer from Gurgaon who has dedicated the past 10 years of his life in helping over 800 kids from underprivileged background get quality education FREE of cost. He started Nai Kiran Universal School with his own pension funds and has ensured children between the age 5-16 get a quality school education. Nai Kiran school is currently running intents and needs your support to get out of the open ground and into a proper school building.

"Age is just a number, it is never too late for an act of kindness"

Khurana is a retired public servant from Haryana State Government and has been a ray of hope for parents, for whom providing school education to their kids was a distant dream.

Nai Kiran School is a makeshift school though it may look like a temporary setup, however, in last six years, the school has positively affected  lives of hundreds of kids by introducing them to the mainstream education absolutely free of cost.

Apart from classes from nursery to 10th grade, the school also provides free stationery, textbooks, and uniforms. To ensure that none of the students have any nutritional deficiency, Khurana supervises a midday meal program. Nai Kiran is a one of kind initiative is supported by its own group of volunteers and well-wishers.

"It all started with my driver's son"

Khurana recalls an instance from 1998 when he was posted in Faridabad. He was impressed by the inquisitive nature of his driver's son often visited the family home. The family began tutoring him every evening, and soon the child began to develop a keen interest in science. When the child showed promise, Khurana, enrolled him in private school and funded his education. Eventually, the kid grew to become an engineer and now works in a reputed organization. Khurana then decided that after his retirement he would start a school which would take care of such children.

Khurana is a Sikh who religiously practices Dasvandh, where the community donates one-tenth of their earnings towards the common resources of the community. He experiences immense satisfaction by serving the community and helping the people in need.

After returning to Gurgaon in 2005 post his retirement, Khurana with two kids from nearby slums started the school in a parking lot of his society. Inspired by his initiative of helping kids spend their time constructively, the other parents from nearby areas approached him. Gradually the number increased to 30 children and they needed a bigger place to conduct the classes.

Khurana used an old plot he had invested in to conduct classes and the school was now conducted out in the open. In order to ensure that the kids won't be distracted during the class, he set up tents with his own pension funds.

"I have been through the pain, which these kids go through"

He recalls his days of struggle when he was just 3 years old when he witnessed the horrifying experience of the partition. His parents had no money when they came to India which forced him to stay in one or the other tents during his childhood. While growing up he realized the importance of education and used to spent hours studying under street lights. Since then, he had a strong desire to help people in need.

"For six years now, I have been waking up 5:30 AM to prepare for the classes"

Khurana's day starts at 5:30 AM with cleaning the plot, and arranging equipment for setting up the tent and ends at 10:00 PM when he finishes buying stationery and grocery for next day's midday meal. Nai Kiran School is run with the help of a paid staff of 14 teachers, four assistants, and one administrator. Eight volunteers also help with the smooth functioning of the school. The biggest challenge the school faces currently is the absence of an infrastructure. Every day, time and effort go into raising the tents. The children also get distracted easily because of the lack of secure rooms and need to be monitored constantly so they stay within the school premises.

The school currently requires financial support in order to build a school building. Your support will help the children to get an education and build a great future for themselves, their family and the nation.
Make a donation for Nai Kiran School 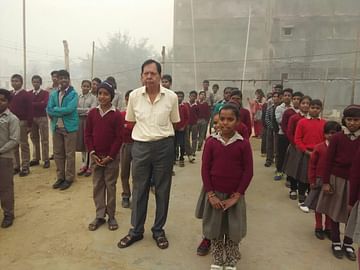 J.D. Khurana Needs Your Support To Build A Real School For His Students

Nai Kiran Universal School doesn't have a roof for 800 students. Your contribution can help them.