Kerala Floods Have Ruined This Family's Hope Of Saving Their 2-Year-Old Son Who Needs An Urgent Transplant | Milaap
loans added to your basket
Total : 0
Pay Now

“I am scared that my son’s condition will worsen because of the floods – he is more prone to infections now. If he does not get a bone marrow transplant soon, he may lose his life. I haven’t been able to work as I cannot stand or walk much after my spinal cord was badly damaged in an accident. The kind people of my town were helping me out so far, but with the flood situation in Kerala, everybody has lost everything. I stand to lose my house as well, in these lashing rains. I cannot save my son and need help desperately.”-Abu Baker, father of 2-year-old Muhammed Razil.

Mohammed Razil has x-linked agammaglobulinemia, a blood disorder that badly affects the body’s ability to fight infections. Abu Baker and his wife Afsat have already experienced the gut-wrenching pain of losing a child before. A few years back, they lost their first child to the same disease after unsuccessful attempts to get his disease diagnosed.

“We had taken him to many doctors in our area but none of them could understand what was wrong. That is why when Razil started getting recurrent fevers and loose motions at just 2 months, we took him to the best hospital in our area, despite being poor. When his disease was diagnosed, we were both relieved and sad. Relieved, because we know that he can be cured, and sad because we cannot afford his treatment.”-Abu Baker.

Every month, Razil needs to get injections of immunoglobulins costing around Rs 16,000. His father has to beg the people in his town for buying these expensive medications; but there is no other way – Abu Baker knows that his son cannot survive without these.

“Once, when I delayed getting the medicines due to lack of money, his body started reacting very badly. He developed a high-grade fever and vomited everything he ate that day. He also had loose motions that would not stop. His face had become so pale – it was very scary. When people saw his plight, they helped me in getting his medicines. Everybody in our town knows how bad his condition is.”-Abu Baker.

Razil’s mother has clinical depression, which makes life even more difficult for this sweet baby

Razil lives with his parents, elder brother Nihal (7) and grandmother in a small town in Kozhikode. His primary caretaker is his grandmother because his mother’s mental state has not been healthy ever since the death of her first child. She was diagnosed with depression a few years back, and has been on medication as well.

“Sometimes she runs out of the house in a state of angst, thinking that she would lose Razil too. Some days are so bad that she refuses to talk or even eat food – on those days Razil pines to be with her but she does not pay attention to him. Her depression is getting worse as days go by – if something bad happens to Razil, I don’t know if she will able to take it.”- Abu Baker

It was with great difficulty that Abu Baker took his son to Chennai for consultation, after the doctors in Kerala said that a bone marrow transplant is the only way he can live a normal life. Tests confirmed that Razil’s brother is a fully matched donor and everything is prepped for the transplant except the money. Abu Baker has already borrowed so much money from people in his  town and cannot ask them for more help.

“The floods have added to my problem. I cannot ask people for financial help when they are already fighting battles on their own – some houses in my town have been completely destroyed by the rains. He needs a bone marrow transplant urgently - I am praying for a miracle because I am very helpless.”-Abu Baker.

Razil has a rare disorder that has compromised his immune system – his body is not strong enough to fight any type of infection – ranging from a small cold to a high grade deadly fever. He is being supported by strong immunoglobulin injections for now, without which he will succumb to infections. But he cannot survive on these injections for long. Doctors have recommended a bone marrow transplant as soon as possible and his elder brother Nihal is a fully matched donor, but his disabled father cannot save him. 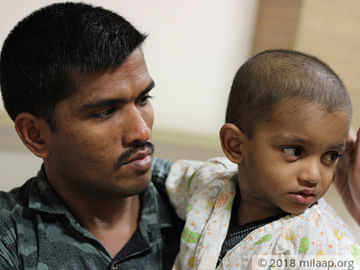 A severe blood disorder threatens to kill this child, but his disabled father cannot save him.