Away From His Village, This Father Is Struggling To Save His Son From A Blood Disease In The Big City | Milaap
loans added to your basket
Total : 0
Pay Now

Away From His Village, This Father Is Struggling To Save His Son From A Blood Disease In The Big City

Shares
Shares
Share on whatsapp
Crammed in a small home, Khalik and Faiz have now been living in Mumbai for nearly 8 months now. Khalik reached the big city with a small bag in one hand and holding his son, Faiz (6), in the other. Mumbai, the city of dreams, has something to offer them too. They are not there in search of a better life. Khalik got there to save his son. After being turned away by many hospitals in Banaras, Khalik has found a cure. Unfortunately, he cannot afford it.

They have been struggling for months now - for space, food, and survival

When Faiz started showing the first symptoms, it did not seem like a dangerous disease. Khalik thought it was just anemia. Faiz was weak. He would sleep most of the time, and would not clot easily if he injured himself. By the time they realized that beetroot, spinach, and pomegranate cannot cure his anemia, his condition had gotten worse. Hospitals were of no help until someone referred them to a doctor in Mumbai.

“All these months, I have been trying to get work and take care of Faiz on my own. He needs blood and tests every week. Sometimes I have to take him almost every day. If I don’t work, I will not have even a hundred rupees for the day. You see he has aplastic anemia. His body is not making enough blood and he needs a bone marrow transplant.” - Khalik

Faiz with his parents and younger brother

Faiz is extremely perceptive. He knows he’s unwell and sees how much his parents are struggling to get him treated. He also knows he can’t go back to school anytime soon, so, he never asks. When they have to stay in the hospital the whole day, he sometimes spends time in the playing room on the toy bike. But on most days, Faiz doesn’t even have the energy to sit up.

“He loves to draw. He would bring home beautiful paintings of flowers and trees from school, but here I can’t afford to buy him colours or a book. We will get our old Faiz back only with the transplant." - Khalik

Faiz is running out of time, and his father is out of options

Faiz needs a bone marrow transplant at the earliest to survive. His mother, Shama brought his 2-year-old younger brother to Mumbai so he can be the donor. Back in Banaras, Khalik was a daily wager on farm land. Here, he does any odd job including construction, painting, and more so he can buy his son three square meals a day.

They have only one dream - to save Faiz. Your support can fulfill this dream. 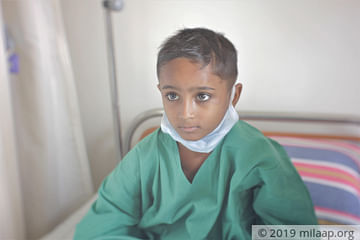 Can't Buy Him Crayons, How Can I Buy Him Life?

Your support can gift this little boy a chance to live and be an artist.