He Cannot Afford Bus Tickets To The Hospital, Leave Alone Save His 3-year-old From Cancer | Milaap
loans added to your basket
Total : 0
Pay Now

He Cannot Afford Bus Tickets To The Hospital, Leave Alone Save His 3-year-old From Cancer

“We don’t have good hospitals in our area. So when we found our 3-year-old son,  Mohamed Zahim, has cancer, we were determined to take him to Chennai, more than 70 km away from our home in Kalpakkam. I lost my job as a school peon because of the regular trips to the hospital. Chemo is the only thing that is keeping him alive, and we cannot miss a single session, even if we cannot really afford it.”-Rasheed, 3-year-old Zahim's father .

Zahim’s stomach and face had started swelling all of a sudden, and it was only the beginning of more bad things to come

Zahim was his usual self that day – cheerful and busy playing with his siblings. His mother, Zareena, suddenly saw that his face had puffed up. He didn’t cry or show any signs that he was feeling uncomfortable but he looked like he was getting very sick.

“His face became so swollen that we thought something has bit him. But slowly we saw that his stomach had also started swelling up. We were very scared because nothing like this had happened to him or our elder children before. We took him to a clinic nearby and the doctors gave us some medicines. But later, he even started bleeding from the gums. That is the exact moment we knew that we had to brace ourselves for some bad news.”-Zareena.

Tests confirmed that their toddler had blood cancer, and he needed to be treated at a hospital with good facilities for cancer care

“The doctor who diagnosed Zahim with cancer clearly told us that he should be taken to a good hospital in Chennai. There was absolutely no treatment available in Kalpakkam. I didn’t have a choice but to accumulate all the money that I had and get on the next bus to Chennai.”-Rasheed.

The family couldn’t afford to take Zahim to Chennai in a private vehicle, they had to use the government bus which in turn made him sicker

“He was coughing and breathing hard because of all the dust from the roads on the way. I knew that taking the bus was not such a good idea, but we cannot afford hiring a car on rent. My only aim was to get my child to the hospital so that he could get treated fast. The paleness of his face was making me very scared – at one point I even thought he wouldn’t even survive the journey to the hospital.”-Rasheed, Zahim’s father.

Zaheem has been undergoing treatment for the past 6 months, his father has lost his job because of the constant traveling to the hospital

Rasheed cannot afford to rent a place near the hospital in Chennai and has to travel back and forth with Zahim every week. It has been making little Zahim very irritable, but the father has no choice.

"I have not only lost all the money that I had saved up, but also my job. Nowadays, my wife takes him to the hospital while I hunt for another job. I have to find another job because I am not able to keep up with Zahim’s hospital charges. My two elder children have to be left in their grandmother’s care. It is a very pathetic situation. At the end of all this, I hope my child survives.”-Rasheed.

At first, little Zahim would cry uncontrollably at the hospital but today he is the one who reminds his mother to give him medicines

Zareena found it very difficult to cope with Zahim’s condition because she was always guilty that she couldn’t take his pain away. When he cried, she cried inside too. But today, Zahim has become so accustomed to the hospital and treatment that he tells her it is time for his medicines.

“I was scared at first, wondering about how my little boy will face all this pain. But he has given me courage. When he smiles and tells me that he has to have his tablet, I can sense that he is a fighter. And that he will overcome all this.”-Zareena.

Rasheed’s financial condition has become so bad that he has to borrow money to take him to buy bus tickets for the two-hour journey to the hospital. Their only saving grace is that the doctors have told them that with continued chemotherapy for three years, Zahim will be able to be healthy again.

“I have already spent around Rs 3 lakhs on his treatment, by borrowing from friends and relatives. I am turning to crowdfunding because it is my only hope right now. I want to save my child. Please help me.”-Rasheed begs to help his son. 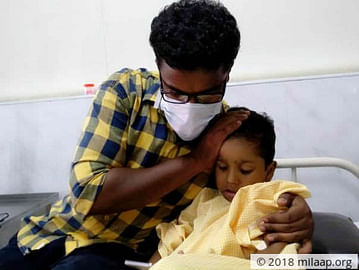 UPI: rzpy.givetomlprashid00001@hdfcbank (Copy to clipboard)
Or
Click here to read the instructions before you make a bank transfer.