Every Breath Is A Painful Struggle For This 1-Year-Old Who Needs Urgent Treatment To Live | Milaap
loans added to your basket
Total : 0
Pay Now

“Since the time he learnt to say his first word, our baby has been sick. There are days when he curls up on my lap to sleep, and suddenly, starts gasping for air. He tries to open his mouth to breathe, but it only gets worse and he needs the oxygen mask immediately. This happens every few hours. He looks at me scared, tears welling up, but I can’t ease his pain. When he’s not crying, he’s laying on the bed, too exhausted and weak to even move. For the past two months, there hasn’t been a minute where he’s been without pain, not a minute has gone by without us worrying for his life.” – Ifrat, baby Zishan’s mother

Baby Zishan spent his first birthday in the hospital, crying in pain. He has been in the PICU for nearly 2 months now. As Ifrat carries and sings to her wailing baby, she wonders if she’ll ever get to take her son home and if he’ll ever be free from this excruciating pain. The only thing that can save him is continued treatment, but his poor parents can’t afford it.

Recurrent fevers were making him weak, but it was months before his deadly disease was diagnosed

Ever since he was 4-months-old, Zishan has been constantly falling sick. Every few months he would have a fever, cough and cold. He was admitted in the hospital for pneumonia and severe respiratory distress. He soon recovered, and his relieved parents took him home.


“We thought we were taking home a healthy baby, but within days, he fell terribly sick again. We had to rush him to the hospital. Every few hours, he needed oxygen because it was almost impossible for him to breathe on his own. When I watch him lying on the bed, helpless, I think of how joyful and naughty he was. He would run out of the house every chance he got, and I would go running behind him to bring him back. Now, he can’t even sit up without help.”

His lungs’ airways are completely damaged, only oxygen support can save him

Baby Zishan has bronchiectasis, a severe disease of the lungs where the airways become damaged which lead to repeated infections and extreme difficulty in breathing. He has been on oxygen support and the respiratory assist for 1.5 months now. Zishan’s condition is slowly improving, but the oxygen support is the only thing keeping him alive. The only way Zishan can go back to the warmth and comfort of his home is if his parents can afford a home BIPAP, a device that aids in respiration. However, Ifrat and Mohammad Chand have nothing left to give their son the treatment he needs.

“Zishan fell sick so often that my husband's income as a driver wasn’t enough to afford the medicines. I started to learn to stitch so that I could get some work and we could afford it. However, I haven’t worked ever since his condition worsened and he was admitted to the PICU. My husband hardly earns 2000 in a month. We could start his treatment only because of the loans we’ve taken. After a few days in the PICU, we couldn’t pay his bills. The hospital and the doctors have been extremely supportive, but our poverty is standing in his way.”

Despite the hospital waiving the bills, Ifrat and Mohammad can’t afford the home breathing device that will help their son recover from this terrible disease. They desperately need your help to save their son from this misery.

Baby Zishan can only start recovering if his parents can afford the device that will help him breathe. They’re struggling to even buy his daily medicines, 5 lakhs for his continued treatment is beyond their reach. Zishan is getting better, but he needs continued treatment and the respiratory aid to breathe properly. With your support, baby Zishan can finally recover from this severe disease and go home.

Your support will save baby Zishan’s life. 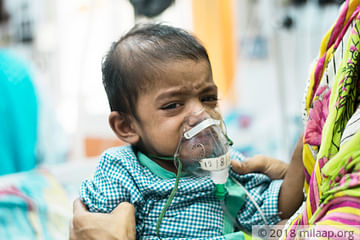 He Cries In Pain All Day And Struggles For Every Breath, He Won't Make It Without Urgent Help

Zishan needs continued treatment to survive, but his parents are struggling to save him.