Daily Wage Labourer And Wife Think Starvation Will Kill Their 10-year-old Child Before His Defective Heart Does | Milaap
loans added to your basket
Total : 0
Pay Now

“Mani Krishnan cannot eat even a morsel of food because of chest pain. He tells me, ‘Appa, I am feeling very hungry but cannot swallow, it hurts a lot’. We are relieved when he manages to eat half an idli or a small piece of dosa because there are days when he eats absolutely nothing. He has two holes in his heart that are growing and causing him to slowly starve to death” - Rathnavel, father of 10-year-old Mani Krishnan.

Mani Krishnan’s parents believed that a single surgery would solve their son’s heart problems forever, but they were wrong

When Mani Krishnan was born, his mother, Anusiya, noticed that his face, hands and legs had a bluish tinge. He was also having trouble breathing; the doctors found that the vessels in his heart’s lower chambers were reversed which was causing less oxygen flow in his body. His parents were told that if a surgery is no performed before he turns 3, his life would be in danger.


“When the doctors told us that his life was at stake, my husband started borrowing and accumulating money. Finally, when Mani Krishnan was just over two years, he underwent the surgery. They said it was a success, but told us that there were still two holes left in his heart that would close on their own.”- Anusiya, mother.

Rathnavel and Anusiya took really good care of their child as instructed by the doctors; they did not allow him to walk or run fast, but his heart condition did not improve. The holes did not close on their own; on the contrary, they have come to pose a serious threat to his health. Only an open heart surgery can save him now.

“He is always complaining of chest pain. He cannot breathe properly, let alone walk. Things were not so bad before. I think as he is getting older, his heart his failing him more. At night, he wakes up in the middle of his sleep gasping for breath. When we ask him what’s wrong, he just tells us that it was a nightmare. I know that he is suffering, even if he does not tell me” - Rathnavel

A sharp pain in the chest is has handicapped this 10-year-old to the extent that he cannot even eat to survive, much to his parents’ dismay. They have to force-feed him sometimes, and when they do, he vomits uncontrollably.  The pain and breathlessness have made Mani Krishnan’s life a living hell.

“My poor son wants to do a lot of things; he wants to be an athlete and do very well at school, but his heart is failing him. Sometimes he tries very hard to keep up with his classmates and be ‘normal’ like them, but gets tired very fast. He does not have a lot of friends because he cannot play with anybody. He told me one day recently that he’d rather die than live like this. I didn’t know what to tell him because even I fear the same” - Anusiya, mother.

Rathnavel works as a daily wage labourer in a village 20 km away from Kumbakonam in Tamil Nadu. He makes around Rs 5,000 per month if work is available. On some months, he makes absolutely nothing. For Mani Krishnan’s first surgery, he had borrowed heavily from moneylenders and has not repaid even the interest till now. He cannot think of borrowing again without paying off the previous loans completely.

“We have to take Mani Krishnan to Chennai every time he complains of pain in his chest because we think it might be fatal. We cannot afford travelling costs itself, how will we afford the surgery that costs Rs 4 lakhs? My boy is getting sicker and sicker every day. He cannot even sit up straight nowadays because of his pain. If he doesn’t get surgery soon, we will lose him, surely. I hope God finds us a way before it is too late” - Rathnavel

Your contribution can save this 10-year-old's life 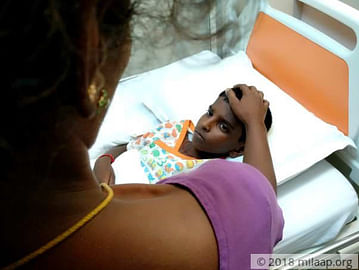 UPI: rzpy.givetomlpmanikris001@hdfcbank (Copy to clipboard)
Or
Click here to read the instructions before you make a bank transfer.