4-Year-Old’s Liver Infection Will Damage His Brain And Put Him In A Coma Without A Liver Transplant | Milaap
loans added to your basket
Total : 0
Pay Now

Shares
Shares
Share on whatsapp
Laxman is 4 years old. He is hungry all the time but vomits anything he eats. His stomach keeps bloating and he is always in pain. In just 15 days, jaundice damaged his liver completely. Now, this disease is affecting Laxman’s brain. As a welder, Laxman’s father does not make much. If Laxman does not get a liver transplant in the next few days, his father will lose him forever.

"We thought with timely medication Laxman's jaundice and fever will go away. Instead, it just got worse. The doctors did some tests and told us Laxman doesn't have much time, a viral infection has damaged his liver and it'll damage his brain if we can't pay for his transplant." - Shekar

Laxman is the youngest in his house and is always pampered. He was always full of energy and as soon as he comes back from school, he would go to play badminton with his sisters. But one morning, his mother saw Laxman still lying on his bed, covered in the blanket and his body shivering. She noticed a yellow tint in his skin and eyes and his body running on high fever. He had jaundice and to the parents despair, his jaundice levels were just increasing.


“His stomach started swelling up and he was crying in pain. We took him to a hospital in Hyderabad, he was immediately admitted in the ICU. We were shocked and cried so much when doctors said that his liver is damaged.”- Praveena, mother

"He's losing his strength and if he doesn't undergo the transplant we'll lose him forever."

Due to Hepatitis A viral infection, Laxman’s bilirubin levels are very high because of which his jaundice is getting worse. For a normal child, it should be 1 mg/dl but for Laxman its 42 mg/dl. Even the medicines are not helping him anymore. He has unbearable stomach pain and excess fluids are removed whenever his stomach swells up. Any further delay in treatment will damage his brain and he might have seizures and eventually slip into coma. His parents are most likely matched donors but without any funds , they cannot afford the transplant.


“He’s hungry most of the time but he throws up whatever he eats. He used to be the first one to get up in the morning and wake us all  but now he barely has energy to even to sit by himself. He used to be so healthy, I never thought his health would worsen to an extent that he would need a liver transplant.” Praveena, mother

Shekar is determined to take his son home healthy. With the little income he earns by working in a welding shop, it's impossible for him to afford the transplant. He could arrange Rs 1 lakh which was only enough for Laxman’s medicines and tests.

“I earn Rs 10000 per month and now I’m spending the same every day for my son’s medicines. No matter how much I try to arrange funds, it's just not enough.” - Shekar, father

“My son doesn’t have much time and it’s impossible for me to arrange Rs 18 lakhs in such a short time. He is too little for all this pain. Please help me to save him." Shekar, father.

Your contribution will save Laxman before he slips into coma 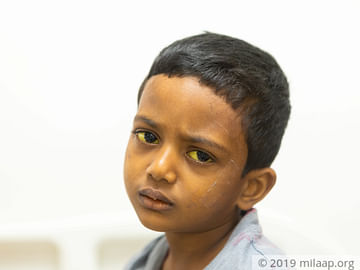 Even the medicines are not helping him anymore and if his jaundice worsens, he will slip into coma