Construction Worker Can’t Afford Electricity At Home Because He Is Struggling To Save His Son From Cancer | Milaap
loans added to your basket
Total : 0
Pay Now

Shares
Shares
Share on whatsapp
Every night at 8 pm, Sathish blows out the oil lamp in his house and lays his head to rest on the cold pillow next to his wife and children. Ever since their 2-month-old, Lakshmish, was diagnosed with cancer, they’ve lived in darkness. Forced to move to a smaller home with no electricity to try and afford their baby’s treatment, Shathish and Manjula’s struggles are never-ending. They make sure to cook food and help their older daughter with her homework before night falls and charge their phones in the hospital when Lakshmish is getting chemotherapy. However, for them, nothing compares to the pain and suffering their baby is going through. For the past one month, all Sathish worries about, laying wide awake at night is how he can save his baby from cancer.

Baby Lakshmish was born healthy, but within weeks, his condition deteriorated

When Lakshmish was born, Sathish and Manjula’s happiness knew no bounds. Their daughter, Lakshya (5), was so excited to have a little brother that she would ask them every day if she could take him to school with her. Fifteen days after his birth, they had a small naming ceremony with a few of their closest family members and named him Lakshmish. And just like the Goddess his name is derived from, they wanted him to prosper. Sathish and Manjula were prepared for all the joys of parenthood once again, but they never imagined that in a few weeks, their baby would be diagnosed with cancer.


“One day, he became so sick that he cried for hours together. It was 3 am and our baby was still in so much discomfort. We took him to the doctor, but even the syrup didn’t work. His fever was only increasing. When even after days his fever didn’t subside, we took him to a bigger hospital. As soon as his test results came back, they told me he had cancer. They said words like ‘biopsy’ and ‘bone marrow test’ and I didn’t understand what was happening to him.” - Sathish, father

With treatment, their baby is getting better – but all his progress will be in vain if they’re forced to stop his treatment

Baby Lakshmish has a cancerous tumour on his left kidney which has spread to his liver. He was immediately started on chemotherapy to contain the tumour, and has completed two cycles so far. As terrified as they were, Sathish and Manjula saw that with treatment, their baby was improving. Baby Lakshmish is has fought hard to make it so far and with continued treatment, he can beat cancer. Unfortunately, his parents don’t have the means to continue his treatment. All his progress will be in vain if they’re forced to stop it now due to their poverty.

Sathish worked hard for his family, but now he is left with nothing to save his son

Sathish, a construction worker, has worked tirelessly all his life to support his family. He saved the little he could in the hope of having his own home one day, where his children could play, and space was not a constraint. He dreamt of a happy childhood for Lakshya and Lakshmish. But now, all his dreams are shattered. After Lakshmish’s grave diagnosis, they moved to a smaller house to save on rent. Sathish can’t even afford electricity in his house anymore. He has begged and borrowed from many people, and it’s still not enough to continue his baby’s treatment.


“I’m willing to sell my kidney to save my child’s life if it comes down to that. Despite everything, he’s made it so far only because of his resilience. I can’t take away his one chance of survival because of our poverty.”

Only a few months in this world and baby Lakshmish is already fighting a battle of life and death. The cancerous tumour on his kidney will only spread rapidly if his parents can’t continue his chemotherapy. Their baby has made it this far and has shown tremendous resilience. With chemotherapy, he can be saved. Sathish and Manjula need your help to save their baby from cancer.

Your support will save this 2-month-old baby’s life. 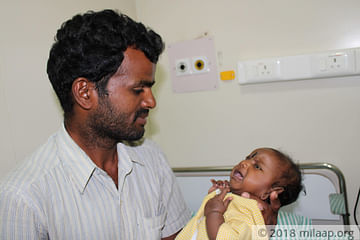 Their Baby Won't Make It Without Urgent Treatment, His Cancer Will Spread Rapidly

Lakshmish needs to continue treatment, but his parents have nothing left to save him.