Unable To Watch His Son Suffer, Aged Father Asks For Help To Save Him From Cancer | Milaap
loans added to your basket
Total : 0
Pay Now

Unable To Watch His Son Suffer, Aged Father Asks For Help To Save Him From Cancer

“I feel I have failed as the protector of my family. While my younger son, Kanchan battles death every day, I am not even in a position to sit by him and be his strength. I haven't been able to work for years now because of a brutal accident that I met with 10 years ago. Kanchan is confident that he will be able to beat cancer, but all I feel is helplessness. While my son is so strong-willed, I am failing as a father,” Naba, Kanchan’s father.

22-year-old Kanchan was a bright young adult. He took admission in college and loved playing cricket. He adored Yuvraj Singh and wanted to be like him. He had to suppress his dreams because his family’s financial status never let him get professional coaching. What the young man never imagined was that he will have to battle cancer just like his favorite cricketer someday.

“My brother knows that he has cancer. He tells me that if his idol could battle cancer, he will too. He is a very strong soul, then there are days when my fighter brother breaks down. He tells me, ‘dada(elder brother in Bengali), I can’t bear this pain anymore. Please ask the doctors to keep me sedated or kill me.’ He has always looked up to me, but today I have failed to take his pain away,” Palash, Kanchan’s brother.

Kanchan has Ewing's sarcoma and Kanchan’s sufferings have never seemed to cease even for a day. Last year suddenly, there was pus and swelling in his spine. When he was taken to the doctors, they told that he had bone TB and was immediately operated. But only after 2 surgeries, the test reports could reveal that he has deadly cancer.

“Only 25 days after his first operation, we had to rush him back to the hospital again. His pus had reappeared and he had a terrible swelling in his spine. He could barely move. He would go numb for hours and groan in pain. His pain has made him a different person. Not just physically, but it has taken a huge mental toll on him. He had plans for his future, but he lies on the bed helpless. He had started believing that there’s nothing left in his life,” Naba, Kanchan’s father.

After his second surgery, Kanchan’s brother shifted him to a different hospital as he knew it was something worse. Doctors then told them that Kanchan has cancer in his bone that has left him bedridden. The young man has already undergone a third surgery to remove his cancerous tumor and now needs a year of chemotherapy and radiation to survive.

“I had started working after I completed my secondary exams. I had to take my family responsibilities when I was just 16. I took tuitions for the kids in my village and somehow managed to earn Rs 4000 a month. My father hasn’t been able to work for 10 years now. We were already in debt during our education years. The small plot of land that we had was gone. Now my brother’s cancer has left us even devastated. Our house is gone. While my mother and I stay with my brother in the hospital, my father has to stay with uncles.”

Palash has already spent Rs 6 lakhs and taken Rs 2 lakhs as a loan. Even after selling everything that they ever had, Palash is unable to save his dying brother. The cost required to save Kanchan is Rs 4 lakhs. The family no longer has anything to even sell and no one to even borrow from.

22-year-old Kanchan is suffering from Ewing's sarcoma, a severe type of bone cancer and needs chemotherapy and radiotherapy to survive. Even after 3 surgeries and a lot of pain later, he will not survive without urgent treatment.

Your support will help this young man stand on his own feet. 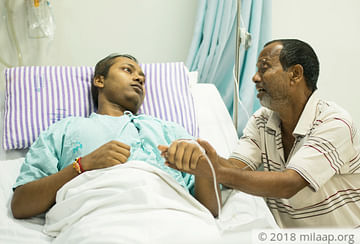 Cancer Will Shatter This Young Man's Dreams Of Helping His Father

22-year-old Kanchan who is suffering from bone cancer and can't even walk needs help to live.