They Told Us To Let Him Die Because Of His Damaged Liver, But We Want To Save Him, Please Help | Milaap
loans added to your basket
Total : 0
Pay Now

They Told Us To Let Him Die Because Of His Damaged Liver, But We Want To Save Him, Please Help

“For the past three months, my wife and I have been shuttling between the hospital and our home to save our son. Looking at the struggle we’ve been going through, our relatives have told us to give up on him. They said you will anyway never be able to afford the money, why are you wasting your time and putting yourself through this pain to see him die. But we can’t do that. He’s our son and we are determined to save him at any cost.” - Nagaraju, father.

Jashith can only survive with a liver transplant as his liver is completely damaged. He doesn’t have much time left, but his father has no money for the transplant.

When 5-month-old Jashith started vomiting soon after he had milk and even started passing white stools, his parents took him to a local doctor in Chittoor, Andhra Pradesh. Despite giving medicines, his health didn't improve and his skin and eyes started showing yellow tint. When taken to the local doctors again, they didn’t say anything but asked them to take him to Chennai. Poor parents were devastated beyond words when they were told that Jashith has biliary atresia, a condition where the the bile flow from the liver is blocked.


“We were told that Jashith is running out of time and he needs to undergo kasai procedure to remove the blockage. It was the only way to prevent his liver from damaging. I thought he will get better after the surgery. But I was wrong.” - Kumari, mother

By the time Jashith underwent the kasai procedure, his liver was completely damaged and so the surgery wasn’t helpful. He still gets severe infection due to which he passes white stools and his body runs a high temperature frequently. He throws up all the milk he drinks, as his body cannot digest food. He needs to be taken to the hospital for every 10 days. Now Jashith can only get better with a liver transplant. Kumari is a suitable donor for the transplant but Nagaraju needs your help to meet the transplant expenses.


“Jashith never stops crying. He’s in pain and it’s the only way for him to express it. He’s just 5 months old and his suffering seems never ending. I see other babies of his age always smiling and laughing. But my son has only known pain since he was born. I want to put an end to his pain but with no funds left, I’m afraid I won’t be able to.” - Nagaraju, father.

Nagaraju is a driver earning a meagre income of Rs 8000 per month to look after his family of four including his daughter Mounisha (6). He has spent Rs 3 lakhs so far by borrowing from others to help Jashith get better, but even that wasn’t enough. With his son’s deteriorating health, Nagaraj hasn’t been able to go to work for the past three months. He’s desperately seeking for help.

“Every time I ask someone to help me save my son, they only tell me to let him die.They just ask me to give up on him.  Now I’ve stopped asking people for money. The doctor said that he will have a healthy life after the liver transplant and the hospital has even helped us set up a fundraiser. We are now only relying on it for the transplant.” - Nagaraj, father

With your help distraught parents can save their son

“We have left our daughter in our neighbor’s care and came to Chennai to save our son. His condition is only worsening. If we delay the transplant any further, we will lose him forever. But we don’t have any means to arrange Rs 22 lakhs in such a short period of time. We will be grateful for your help.” - Nagaraj, father

The suffering that little Jashith is going through is unimaginable. His parents are determined to save him but lack of funds stands in their way.

Jashith needs your help for a healthy life 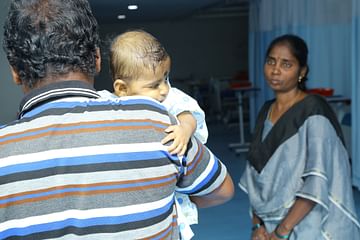 His liver is completely damaged and he's running out of time. Please help

Jashith is just 5-months-old and in a lot of pain. Only a liver transplant can save him