Teenager Who Needs Dialysis Every Alternate Day Begs For A Transplant To End Pain | Milaap
loans added to your basket
Total : 0
Pay Now

You are sending a message to
Issac TJ
Go back

Shares
Shares
Share on whatsapp
Abhishek gasps for air, becoming completely breathless in a couple of minutes. His whole body hurts like it’s being pricked by a thousand needles. He cannot stand and needs support to even use the washroom. Since his kidneys started failing last month, 14-year-old Abhishek’s life has been like this.


“Doctors told us that his kidneys are 100% damaged and this is slowly shutting down his entire body. If he does not go for dialysis every 3 days a week, he will collapse. Those 4 hours are so painful that they make him nauseous, but it’s the only thing keeping him alive now. To live like a normal, healthy child, he needs an urgent kidney transplant that I sadly cannot afford,”-Suresh, father.

Abhishek was born with a defect that did not allow him to pass urine properly until he turned a year old. Doctors informed Suresh and Usha that their son’s kidneys were only 50% functional and that he would need to live on medicines for the rest of his life. But this did not negatively impact Abhishek - he was growing up to be a smart, active kid who loved the outdoors as much as sitting at home, chit-chatting with his parents about everyday incidents. But last year, after a bout of pneumonia, Abhishek’s kidney damage worsened. He had to be on regular dialysis from then on.

“Nobody could tell he had a kidney problem by looking at him. His ability to talk to people of all ages – from small children to elders with warmth and kindness used to amaze us. But now that he is very sick, he has also stopped being his happy, bubbly self,”-Suresh

Despite all the suffering that this young boy is going through, his ambition is intact. He is very sure of what he wants to be – a locomotive driver, driving trains for the Indian Railway. He is weak and lies down in bed all day, but there will always be a book in his hand. Even when he had to go undergo frequent dialysis and had become unable to go to school regularly, he made sure to catch up on lessons.

“He is in the 9th grade, and though he cannot attend classes, he makes sure to call his friends and teachers and be up-to-date. He tells us that 10th is fast approaching and begs us to help him become healthy again. ‘How will I work hard and drive trains if I die?’ he asks. I have nothing to tell him,”-Suresh

This father has lost all hope of arranging money on time, you can help him

Suresh does miscellaneous interior works on a contract basis in Kollam, Kerala. When he is able to find work, he is able to earn up to Rs 900 a day. He says that it is difficult to find work nowadays – at a time when he desperately needs the money. Abhishek’s mother has been confirmed as the donor, but Suresh has been able to arrange only over a lakh for his son’s transplant till now. He is worried that he will lose him. This is Abhishek’s last chance to beat this crippling disease and live a normal life – you can help him.

With your kind contribution, Abhishek can become healthy again and fulfill his ambition of becoming a locomotive driver 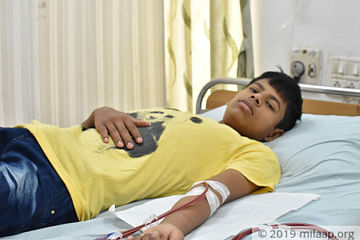 He Hopes To Drive Trains For The Indian Railway One Day

Abhishek's kidneys are 100% damaged. Dialysis cannot save him, only a transplant can, Please help

UPI: rzpy.givetomlpissactj0001@hdfcbank (Copy to clipboard)
Or
Click here to read the instructions before you make a bank transfer.