“I heard my son’s loud, painful scream. When I rushed to the kitchen, I saw him in the hot vessel of 8 litres of boiling milk. I quickly pulled him out, but the damage was already done. His skin was peeling off from his body as he cried out in excruciating pain,” – Mohan, father

3-year-old Hitesh was playing in the house when he tripped on a toy and fell into the big vessel of boiling milk in the kitchen. He is now in the ICU, fighting for his life. His body is 40% burnt and he needs to stay in the ICU longer to survive this terrible accident, but his parents have nothing left to save him.

Many hospitals refused to treat the little one

“I was gone only for a minute. I saw that he was playing and went to the other room to get something. Just then, he had gone to the kitchen. It was a terrifying sight.” – Mohan

Mohan and his mother, Parvathamma wrapped Hitesh in a cloth and rushed him to the nearest hospital on their scooter from Somaladoddi village to Anantapur. After boiling the leftover milk from their dairy, Hitesh’s mother, Radha, had taken their younger daughter to the doctor since she had a fever. Radha was devastated when she found out what happened, what was worse, many hospitals even refused to treat him. Mohan wasted no time and immediately took him to Bangalore in an ambulance.


Hitesh's father and grandmother are in the hospital with him

Hitesh fell on his back into the boiled liquid which burnt his thighs, legs, back, chest, abdomen and hands. He needs plastic surgery management, a special dressing to the wounds that will help Hitesh to heal and recover soon. Radha is back in their hometown, taking care of their sick daughter. She can't be with Hitesh when he needs her the most.


“My wife calls me every 10 minutes to ask how he is. She cries on the phone, asking me to bring him back home healhty. She's heartbroken that she can't be with him." - Mohan.

This milk vendor is struggling to save his little son

Mohan runs a small dairy farm of six buffalos in his village. By selling milk he earns around 15,000 per month. He was saving to provide better education to his two children. But this unfortunate incident has not only exhausted all his savings but also landed him in huge debt. Mohan has nearly spent around a lakh until now and needs 3 lakhs to save his son. 3-year-old Hitesh needs to continue ICU treatment and has to undergo plastic surgery management to heal the wounds, without which he won't make it.

3-year-old Hitesh's tiny body is 40% burnt and only ICU treatment can save him. Your kind contribution can help little Hitesh survive. 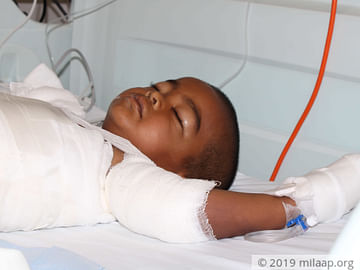 Hitesh needs to stay in the ICU to survive. His parents have no means to save him.