Away From His Parents, This Teenager Is Fighting An Aggressively Spreading Cancer | Milaap
loans added to your basket
Total : 0
Pay Now

Away From His Parents, This Teenager Is Fighting An Aggressively Spreading Cancer

Shares
Shares
Share on whatsapp
“Abbu, I don’t want these injections anymore. Can you please make them stop? They hurt me so much, I think I will die because of them,” - Hafiz is on the verge of tears when his father, Rajjak asks him how he is over the phone. Rajjak can’t afford to miss even a single day of work and hence his old parents have been taking care of his son. The 16-year-old had been battling with blood cancer for the last 6 years and no amount of treatment has been able to cure him of this deadly disease.

Hafiz with his grandmother, Sanwali

“Hafiz had been very weak and tired for some days then. He used to love playing outside with his friends but I noticed that he wasn’t playing anymore. When I asked him he said that his body was aching so much that he could hardly walk. We immediately took him to the doctors and after some tests, we were shocked to hear that Hafiz has cancer,” - Sharikh, grandfather.

An old pic of Hafiz

Hafiz has been diagnosed with chronic myeloid leukemia (a type of cancer that starts in certain blood-forming cells of the bone marrow). He needs a bone marrow transplant at the earliest.

The leukemia that Hafiz has is a fairly slow growing one but it can take on a fast-growing acute form that is hard to treat. That is exactly what has happened to this once-active teenager. In the last year, his condition worsened - he lost a lot of weight and even simple tasks like walking up to the bathroom tires him out. The boy who loved playing outside now spends most of his time lying down on the bed.

“He keeps asking me when he can go back to school. And I know he doesn't find it convincing when I say he will fine soon. I feel so helpless looking at his face." - Sharikh, grandfather

A daily wager, Rajjak needs your help to get his son treated

Hafiz's father, Rajjak is a daily wage worker in a small village of Nandha in Dadri, Haryana. He earns about Rs 300 per day and is the sole earning member of the family. Since Hafiz’s condition worsened since the last year, he has been trying everything in his capacity to get him better.

“My parents are old and it is getting very difficult for them to take care of Hafiz on their own. I try and travel to the hospital as often I can but it's not always possible. Hafiz has been on medicines for so long but now it seems like that if we have no other option left in front of us but the transplant. I am willing to be the donor but even the tests are too expensive for us. I have already spent about Rs 2 lakhs - affording a 35 lakh transplant would be impossible for me without help," - Rajjak.

This teenager has his entire life ahead of him, with your small contribution he can beat cancer and go back home, healthy. 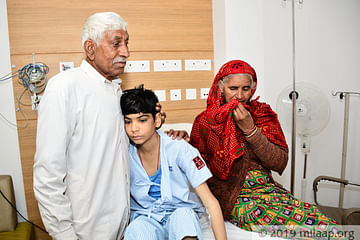 His Old And Ailing Grandparents Are Taking Care of Him, He Needs Help

He needs a bone marrow transplant at the earliest to survive.

UPI: rzpy.givetomlphafizkha001@hdfcbank (Copy to clipboard)
Or
Click here to read the instructions before you make a bank transfer.