Even 2 Bottles Of Blood Every Week Are Not Enough To Keep 8-year-old Darshan Alive Anymore | Milaap
loans added to your basket
Total : 0
Pay Now

"My son has been under treatment for as long as he can remember. For us, Thalassemia is a monster that is taking away his life slowly. For him, this disease is a part of his life. Hospital has become his second home. He needs blood transfusion for every 2 weeks. This has been the routine for the past 7 years. No part of his body is left unpricked. Now doctors are unable to find healthy veins in his body. Needles often move during transfusion. He cries in pain but he knows that he cannot go home and play without transfusions. He has learnt to accept pain." -  Nethravathi.

Darshan was only 5-months-old when Thalassemia crudely entered his life and took control of it.  It is a genetic mutation that affects the blood cells reducing its capacity to carry oxygen. While a red blood cell should be plump, his blood is shriveled and non-functioning. Since then he has been living on borrowed blood. His innocent, happy life came tumbling down with this cruel disease. His bright hopeful days as an infant became the darkest days if his life.

"By the age of 8, my son has taken more medicines than most adults take in their lifetime. He cannot survive without blood transfusions. He becomes very weak without it but the transfusions itself can turn fatal if it leads to excess iron content. I have heard from other parents that his liver and heart might get damaged because of excess iron content. Every passing day is a nightmare for us. I wish my son had a normal life like any other children." - Nethravathi.

Darshan had a tumor in his stomach, an urgent surgery was done to remove it

As if this pain and trauma were not enough, Darshan had a lump in his stomach a year back. It turned out to be a tumor and it was operated immediately. This tiny body has endured so much pain that sometimes he makes others wonder if he had become numb to it. Little Darshan has not given any trouble to his parents. Despite all the pain, he does not throw any tantrums. He cries only during the transfusions and later he becomes normal.


"He has been given several medicines which makes him drowsy and keep him from eating or even walking a little. Yet he had not lost his smile. People fall for his smile easily, everyone in the hospital likes him. He does not know that his life is at risk. Now his condition is so critical that he cannot survive without a bone marrow transplant. I can't imagine losing him. He deserves a life." - Nethravathi.

Nethravathi and her husband Harish are daily wage workers.  Darshan has two younger sisters, Lakumi (6) and Yashashwini (4). They are studying in a government school. Darshan is a very bright student and he even helps his sisters in their studies. Darshan likes to go to school but he cannot be regular to his class because of his health condition. Despite, missing the classes he manages to score good marks.

Little Darshan has been living with thalassemia for the past 7 years. Blood transfusions cannot help him anymore, he needs an urgent bone marrow transplant to survive. His parents are desperate to save him but they have nothing left with them for his treatment.

"Whatever we had is gone. We are struggling to give 3 square meals to our children every day. Both of us together earn only Rs 300/day but there are days where we don't find any work. Despite our poverty, we haven't missed blood transfusion and medicines any time. Blood transfusions alone cost Rs 5000 per month. I don't know how it is possible to arrange Rs 30 lakhs for his transplant. I can't even imagine such huge money." - Nethravathi.


Your contribution can give Darshan a chance to live his life! 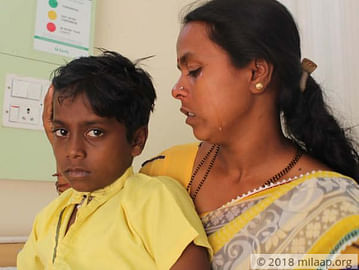 He Has Been Fighting To Survive Every Day For 7 Years

He cannot survive without a bone a marrow transplant, his parent cannot afford it.