This Young Boy's X-Mas Holidays Will Be Spent In Pain Due To Cancer Without An Urgent Transplant | Milaap
loans added to your basket
Total : 0
Pay Now

Shares
Shares
Share on whatsapp
Every morning, Basavaraj (9) wakes up with a spring in his step. He pours himself a glass of water and goes straight to his mother to take his medicines. “Why are you giving me the white one today?” he asks. Like this, Basavaraj has many questions. Basavaraj just started going back to school recently, and every morning, his younger sister, Bhagyashree and he walk hand in hand to their school. Bhagyashree looks up to her older brother and follows everything he does. However, Little Bhagyashree is oblivious to her brother’s ongoing fight with cancer, and that she can be the one to save him. Basavaraj has blood cancer and needs a bone marrow transplant at the earliest. His sister is a matched donor.


“But he can’t go long without the treatment. We even started sending him to school because he insisted so much. He doesn’t have the same energy as before, but it makes him happy to be around other children his age. All we ever think about is when we can ever arrange for such a big amount of 15 lakhs, and if we can even arrange it in time.” – Revanappa

Needles and medicines have become a part of his life, he’s not afraid anymore

Unlike most children, Basavaraj is now not afraid of going to the hospital. It’s been nearly three years since his fight with cancer began, and ever since then, he has religiously been following everything that the doctors have told him to with only one hope – to go back to being the active child he once was. For that, he needs a bone marrow transplant, however, all he can do now is wait for the day his parents, Revanappa and Sangeetha can afford it.

His hope for recovery is crushed by poverty

These days, Revanappa’s day begins earlier than usual.  In the wee hours of the morning in Bijapur, he sets out with a little change in his pocket, and his son’s reports in a paper bag, going to relatives homes to try and find anyone that can lend him money for his son’s treatment. His earnings as a daily wage labourer aren’t enough to even afford his medicines any longer. Revanappa is desperately looking for a helping hand – and we can support him in his struggle to save his son.

How we can help Basavaraj get the treatment he needs

Every time Bhagyashree asks her anna (older brother) when he’s going to the big city next and if she can go with him, Revanappa is quick to divert her attention – it is a cruel reminder to him of how his son’s treatment is getting delayed.

“I’ve spent nearly 4 lakhs for his treatment so far by taking loans, that’s a huge sum for someone who barely has anything to call his own. We’re from a very humble background. Our son deserves to be free from this pain. When he looks back at his childhood, I want him to feel happy. He can fight the disease, but I need your help to save my son.”

We can help little Basavaraj fight cancer together. 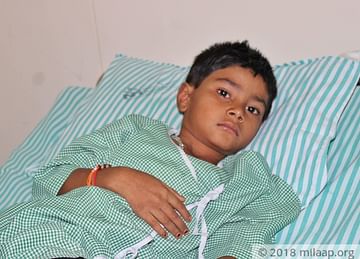 Basavaraj needs a bone marrow transplant at the earliest, but his parents can't afford it.