“While my wife was in a hospital in Bidar, our baby was being rushed in an ambulance to Hyderabad. I thought I was going to lose them both on the same day, but I could be with only one of them.”

The very first sound that their baby boy made was not crying, but little-gasping noises as he struggled to breathe. He was rushed to Hyderabad in an ambulance with Basavaraj by his side, while Kriti lay unconscious on the hospital bed, unaware that her baby was fighting death just a few seconds into his birth. What followed were the most trying and traumatic days the family has ever experienced, and it only continues till their baby is completely out of danger.

Kriti only saw her baby one week after his birth

Kriti and Basavaraj’s baby boy was born a fighter. Despite his weak lungs, and his kidneys and liver not being in the right place, he made it all the way to the hospital and through a high intensive surgery. 11 days after his birth, he’s in the NICU on ventilator support, making little, significant progress every day. However, his fight is not over yet.


“Kriti would call me and ask me to describe how he looked, and I didn’t know what to say because he was ventilator support, with so many tubes on his body. She was discharged only a week after delivery, and the first thing she did was rush to Hyderabad to meet our son. When she saw him for the first time, I expected her to break down, but her silence was even more terrifying.”

Kriti’s shock was inevitable. While Basavaraj had seen their baby go through the extreme lows before becoming stable, the first time Kriti ever laid eyes on her baby, was in the NICU with tubes running out of his mouth.

Basavaraj is a small-time farmer who, on good days, earns around 160 per day. On some days, he also works a nearby local shop in their village near Bidar, Karnataka. He made just enough to feed his family of four. Never did he or Kriti ever imagine that such a monumental fight lay ahead of them.


“Only if we can support his treatment for a week longer, he can get the full treatment and recover fully. He’s made it so far, but if we’re forced to stop his treatment, all of this would’ve been for nothing. I see him doing so well and the doctors telling me that he will pull through. But it’s becoming difficult for me to stay positive now. The bills are only piling up and even borrowing isn’t enough.”

Their baby boy’s medical expenses are almost 1 lakh per day, an amount that Basavaraj doesn’t even make in a year. Kriti and Basavaraj are scrambling. If they somehow manage to keep him in the NICU for a week longer, they can take back home a happy and healthy bundle of joy.

It’s crucial for Kriti and Basavaraj’s baby boy to stay in the NICU for at least one more week to recover. The doctors are positive about his survival with prolonged medical care and attention, but Basavaraj can’t afford to continue his baby’s treatment without losing everything he has. Your support can ensure that this little fighter makes it out of the NICU alive and healthy.

Your support will save Kriti and Basavaraj’s 11-day-old baby’s life. 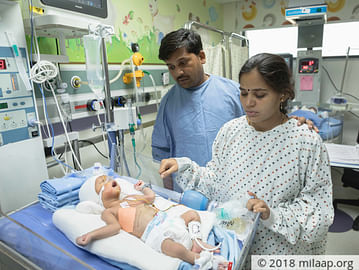 Kriti's baby boy will only survive if he's in the NICU for one more week. You can save him.